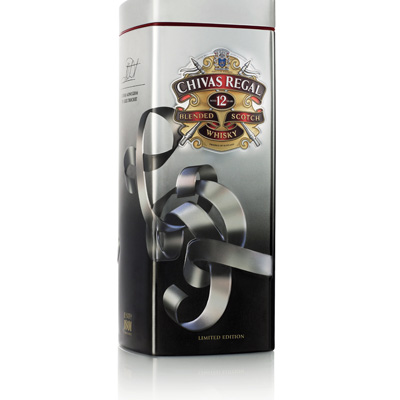 NB Studio has designed packaging for luxury whisky brand Chivas Regal’s 12 Year Old, which will be rolled out this month to 200 countries.

The consultancy was approached by Chivas in 2009 after it responded to a piece of NB Studio work featured in the International Society of Typographic Designers’ poster exhibition My London My City.

Illustrator Alex Trochut was commissioned and art directed by the consultancy to produce ’a bespoke Chivas Regal monogram’ based on the Chivas Regal 12 Year Old crest.

The resulting pattern is ’a steel shaving’ or a ’twisting steel ribbon’, says Rodda, which has been designed with the ’sensibilities’ of a global audience in mind.
Tin packaging has been amended with a simplified design and changes to its finishing.

A microsite – Chivas.com/trochut – has been developed with consultancy Mime Artist and graphics and animation studio I Love Dust, where an animated version of Trochut’s monogram can be downloaded.