The Broadcast, a digital magazine that covers culture, music and science, has launched with an identity inspired by print media from the 1970s.

It has been set up by a creative team led by Daniel Kent at Pioneer Works (PW), an interdisciplinary non-profit in Brooklyn, New York, in collaboration with designer Andrew LeClair, also based in Brooklyn. 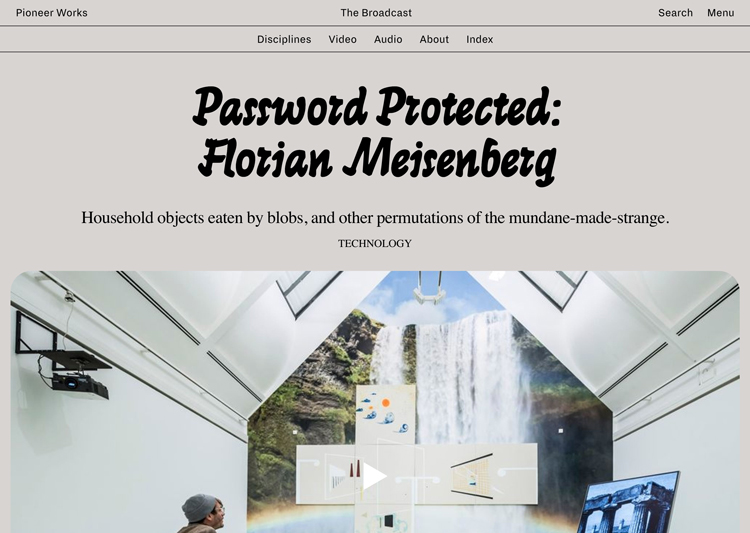 PW “encourages radical thinking across disciplines”, the organisation says, by providing a space for practitioners to work and a platform for discussions. The Broadcast is an “eclectic extension” of its work.

Kent and LeClair began the project by looking at how PW functions. “The organisation is set up to encourage a lot of different people to come through the door,” they say, which includes artists, scientists and students. 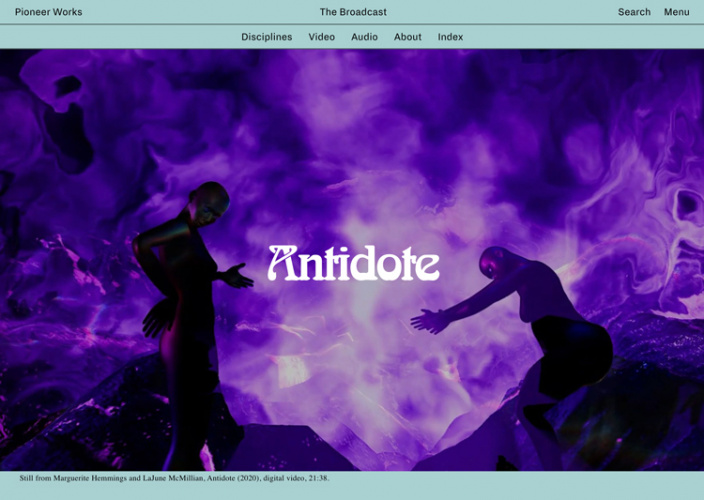 The physical building is also a space where “all of these different people can bump into each other”, according to Kent and LeClair.

“We wanted to make a digital platform that would draw inspiration from the physical ‘thingness’ of PW and the experience of being there,” the designers explain. This included the many books, paper samples, printers and binding machines at the location.

One visual reference in particular was crucial to the start of the project, according to Kent and LeClair. A type specimen book from a typesetter in Ridgewood, Queens New York, reminded them of the history of typeface manufacturers Letraset.

“Letraset transformed the look of DIY publishing by making stylised headline typefaces accessible to the average person as a more expressive and affordable alternative to commercial typesetting,” the team explains.

This has been mirrored in recent years by the “increasing accessibility of type design”, they add.

“A visual patchwork of distinct type styles struck us as an apt metaphor for PW as as an institution,” Kent and LeClair say.

The magazine has been organised into a system of over 50 fonts over its four disciplines; arts, music, science and technology. The designers believe the system is the first of its kind for an online media platform.

“A kaleidoscope array of reference points” 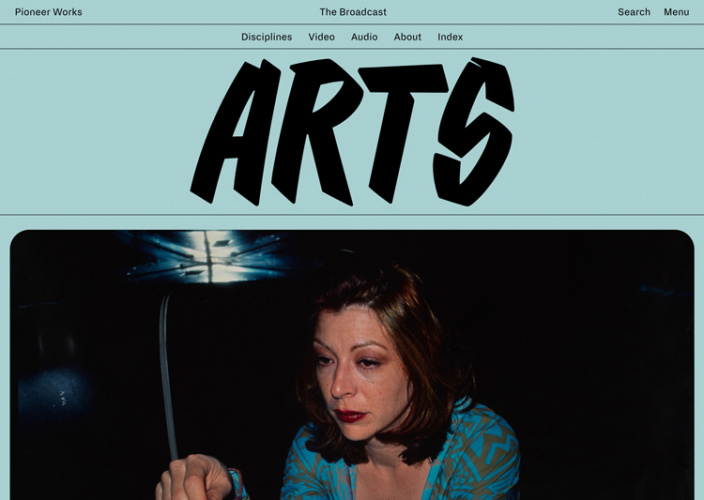 The first challenge was in licensing all the fonts from the individual designers and foundries, according to the designers. The second was to create a coherent and flexible identity for the system.

“It was important to us that the font selection be purposeful and based on consistent rules, yet also be flexible as The Broadcast grows and changes over time,” they add.

Working with a custom tool that allows for font adjustments – developed by Nimrod Barshad and Tyler Yin – the team then assigned fonts to a particular series or discipline. When an article is published, it picks up the “appropriate font as defined by its content”, Kent and LeClair say.

“Our goal is that through repeated exposure, readers will develop a kind of latent understanding of this system, which lends a specific texture to the reading experience,” they add.

The typefaces have been sourced from a wide array of backgrounds. Some are from independent foundries, while others emerged as far back as the turn of the century, according to the designers.

The research phase revealed surprising trends within typography. For example, the typeface Cooper which has become “synonymous with the 1970s” was actually created in 1922, Kent and LeClair explain.

“Many of the most iconic display typefaces are revivals of typefaces that were created much earlier and in a very different context,” they add.

While Kent and LeClair wanted to “draw on the ethos and spirit of DIY publishing” seen in zines and independent publications, they were careful not to “lean too heavily on the visual trappings of print”.

They say: “By creating a kaleidoscope array of reference points that mixes both contemporary revivals with older digitisations, our hope is that we’ve created something that looks new, even though it carries many associations with the past.” 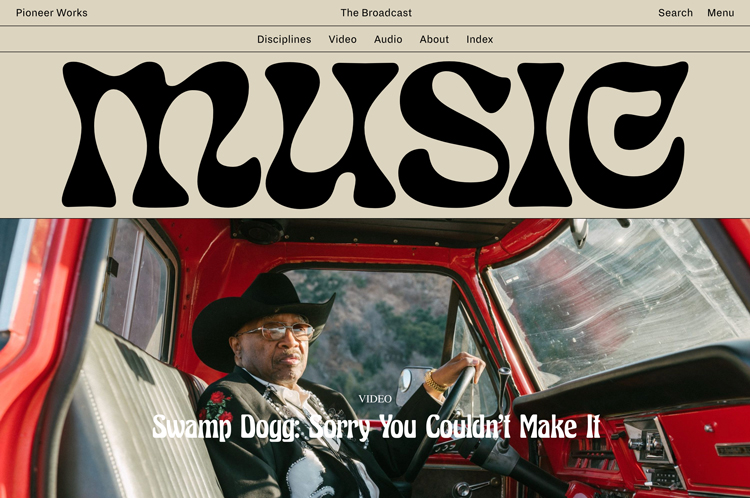 In reference to the world of DIY publishing and ‘70s print media, The Broadcast has an “off-off-off white” colour system in an attempt to set it apart from the default white background of web pages, Kent and LeClair add.

On the individual homepages for each discipline, the masthead rotates through the associated typeface. A selection of lighter backgrounds have also been chosen which seeks to differentiate the magazine from PW’s main website, according to the designers.

Other details such as rounded corners and serif body typography have also been used to reinforce this distinction. An index menu also allows readers to search all the editorial content using different filters. 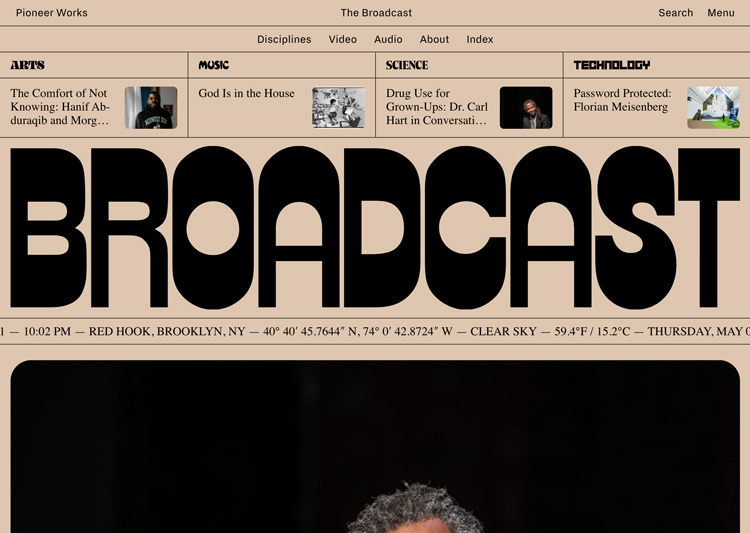 On the magazine’s marquee, local time, weather, latitude and longitude based on the location of PW’s building in Red Hook, Brooklyn is listed.

When readers are in hover state – pausing over an interactive page – the ‘ink’ starts to bleed as a “subtle reference to print”, Kent and LeClair say.

The magazine’s inaugural issue launches with a contribution from neuroscientist and philosopher Sam Harris (with illustrations animated by Annapurna Kumar) and a conversation with Dr Carl Hart about drug use for adults.

You can find out more about The Broadcast on PW’s website. 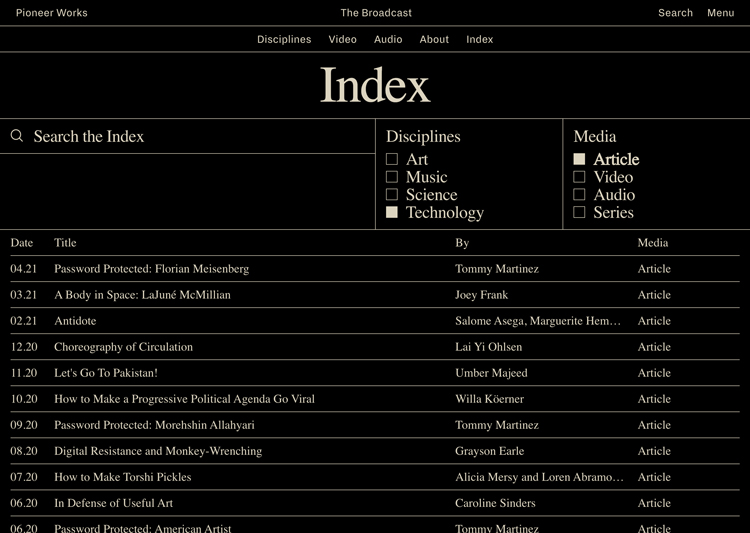