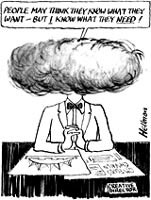 Are you a middlescent? Do you wear snowboarding clothes and spend your evenings playing computer games, even though you are closer to 40 than 14? Do you have more trainers than ties? According to a lifestylee piece in The Observer (24 July), more and more 30- and 40-somethings are refusing to give up the spirit of yoof and are buying all sorts of immature lifestyle accoutrements.

Take mopeds. Once the preserve of spotty boys called Kev who hung out in the local bus shelter, they are now the preferred mode of transport for the savvy and salaried middlescent. The pool of middlescent products is growing faster than the Sunday supplements can write about them. You can now add to the mix those funny hop-on scooter things. People are falling over themselves to get on one, even though they were once the preserve of gravity-challenged kids who couldn’t master their bicycle.

I also know of at least three design creative directors the sunset side of 30 who regularly bunk off from the studio to go and ride their skateboards. It’s only a matter of time before the design industry has to cope with a spate of PokÃ©mon muggings and a rash of acne among its senior members.

Such demographic “isms” as middlescence usually occur when a little bit of social change meets the need to fill space in a newspaper. However, we certainly do live in socially unpredictable times. Last year everyone fancied their chances as a dotcom entrepreneur; now people have started fantasising about salaries and enhanced company pension schemes again. The speed of behavioural change highlights a problem in the way much design work is undertaken. That problem is the unsophisticated way many designers think of their audience.

In so many projects – particularly graphic design – the designer spends little time researching and pondering the needs and tastes of the end user, relying instead on their instinct as to what “works” and what doesn’t. This whimsical approach produces a muddy soup made up of the designer’s aesthetic prejudice, projected aspirations and impatient assumptions. Packaging design is often considered the least adventurous of the graphic arts, but it is one of the few disciplines that has a rich research heritage. Say what you like about the Mac-a-Pack brigade, they generally have their user profiles sorted out.

In other areas, work-in-progress is often measured against the instant judgements of whichever creative tyrant holds sway. No other person is considered or consulted; if it feels right to the designer-king then it must – in some spuriously objective way – be right. This is one reason why creative issues cause problems in so many studios. If the “rightness” and “wrongness” of a piece rests solely in the mind of one designer, how can others contribute their views?

No wonder so many talented marketers, account managers and new business directors feel so distanced and enraged by the creative process. Forming an understanding of who the users are and having that as a touchstone for everyone involved liberates all concerned to contribute their views. Sharing involvement gives a project a much higher chance of success. Group creativity creates highest common denominator work. Putting the user to the fore also reminds those with ownership of the project that they are conversing with others – their user/ viewer/ customer – not expressing themselves into the ether.

It is a clichÃ©, but it also (amazingly) still needs saying – being a designer is not the same as being an artist. The use of post-creative research is a different matter, and a complex issue that requires more than the space I have left. All I would say is that research does not kill great ideas – people with no sensibility as to which ideas will benefit from being researched and which won’t are what can kill great ideas. A new and different approach to something might have to be brought out into the sunlight and the fresh air before it can come to life.

If you are experiencing frustration with the way the creative process takes place in your studio, you should look at the way the user is treated. If they are sublimated to the ego of one designer then you should try to bring them out into the open. You might have to fight to free them and get discussion out into the open, but it will be better than having to suffer the tyranny of a creative dictator.

I have to go now; I am planning to get my orange space hopper out and bounce down the arcade to meet my adultescent mates.