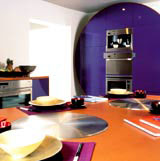 The project affirms the departure of Red or Dead founders Wayne and Gerardine Hemingway from fashion design and retailing to interiors products.

The products include a plug-in “cooking/ meeting table” incorporating the company’s Tepan hobs and a 3.65m-diameter circular storage unit that includes slots for Miele appliances such as a coffee machine and steamer. Both concepts were developed by Gerardine Hemingway for the couple’s “home office” in Wembley, north London, for home working.

The project follows work for carpet manufacturer Milliken, developing carpet tiles that resemble denim and concrete. According to Wayne Hemingway, “At Red or Dead we always looked at naff subjects, and carpet tiles have a fairly naff image”.

Hemingway Design was formed last October after Gerardine sold her shares in Red or Dead, of which Wayne remains non-executive chairman. The consultancy is also developing home entertainment keypads with interactive TV service Open, aiming to make the products “works of art”. Open Sesame is covered in sesame seeds, Open Fire in matches, for example.

Another project involves collaboration with on-line arts platform www.eyestorm.com to bring artists such as David Hockney and Damian Hirst into people’s homes via DVD images projected on to a wall.