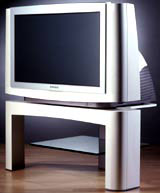 South Korean electronics giant Samsung is launching its first flat screen TV across Europe at the end of this month, designed by London product design consultancy Native. The move is a response to the growth in home theatre and the trend for large, flatscreen TVs.

Under the leadership of Morten Warren, who founded Native in 1996, the award-winning consultancy has created the Plano Super Flat. The most striking feature – the absence of both visual mass at the back of the product and overblown in-built loudspeakers – is in response to consumer feedback, which found that people who wanted earth-shattering sound preferred to link their TV up to their hi-fi, rather than rely on in-built TV sound.

Native has designed the Plano so it can be tailored to fit in with different interior plans. The TV is equipped with a stable, strong purpose-built stand so the TV can be a free-standing unit in an open-plan space or alternatively placed in a corner. The other feature is a detachable colour anodised aluminium facia, laminated to a green glass acrylic screen. This can be altered according to the individual furnishings, through subtly hidden controls within a lip of the front body.

Warren says: ‘We recognised the need to design a TV for Samsung to go against the current trends of flat, one-dimensional design cabinets. By promoting sweeping lines and arcs we re-emphasised form and elegance, both of which are missing in many of today’s video and audio products.’