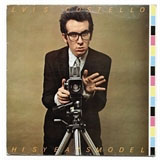 As a teenager in the late 1970s, my obsession with music had broadened to include the record sleeves produced by the likes of Hipgnosis and Roger Dean. Then along came Punk, a new visual language was called for and the new stars of sleeve design – Malcolm Garrett, Neville Brody, Peter Saville – were quickly established.

Slotted neatly and briefly between this graphic reflection of the punks versus hippies confrontation was Stiff Records, where Barney Bubbles was one of several designers responsible for the graphics.

This Elvis Costello sleeve is a typical Barney Bubbles design (although it is from 1978 when Costello had moved to Radar Records – most of the Stiff material I collected has long since been lost). It parodies the elaborate sleeves designed by Hipgnosis, featuring highly stylised photography of Costello and his band The Attractions. This slick appearance is interrupted by the suggestion that the sleeve has been incorrectly finished, the folding being out of alignment, leaving the colour bars and crop marks along one edge. This also has the effect of taking the first letters of ‘Elvis Costello’ and the title ‘This Year’s Model’ round the spine to the other side of the sleeve.

I still like the way Bubbles combines a strong sense of design with an understanding of the words he is designing. ‘Lvis’ still reads as ‘Elvis’ and ‘His Year’s Model’ still has a sense of meaning. It’s a clever, playful concept, which adds to rather than messes with the message.