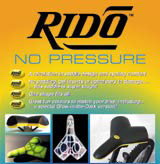 Two wheels are better than four, as any self-respecting citizen will affirm, especially if you are ‘cycling mad’ Ken Brewer, the Londoner who has covered 138 105 miles since 1987. Born ‘near the Bow Bells’, the 75-year-old’s mileage was sadly halted after an operation for cancer of the bladder. Undeterred, and in true Lance Armstrong style, Brewer’s career was resurrected thanks to the design of a special saddle called the Rido. Conceived, designed, developed, and marketed by British designer John Kenney – son of the former Dunlop research scientist, Michael Kenney – Brewer’s former glory has apparently been restored. The residents of ‘tranquil’ Little Clacton must rue the day that the pressure was taken off his perineum.

Embrace optimism – not personnel as overheads