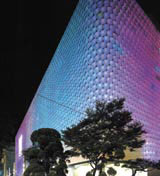 Peter Freeman’s exuberant approach to exterior lighting was born of childhood visits to the nearby Blackpool Illuminations. Freeman says his work is an attempt to keep that thrill but in a ‘less tacky’ way. His most recent project is Travelling Light, an extravaganza of LEDs in a 13m column alongside the M5 motorway near Weston-super-Mare. The beacon, set astride a 15m base, is designed to be seen for miles around. The lighting display is versatile, and varies from gently changing primary colours to displaying messages or images to coincide with particular dates, such as hearts for Valentine’s Day.

A lot of Freeman’s work is the result of commissions from urban regeneration projects. ‘People have realised that part of urban regeneration is to do with lighting. It can create 24-hour spaces, and can make areas safe, uplifting and aspirational,’ he says.

Given that his clients tend to be local authorities, Freeman believes the interactive element of his most recent work is particularly important. ‘The main thing about interaction is that it builds a sense of ownership when you put something out in the public realm. It also breaks down traditional barriers,’ he explains. Spectra-txt, a stainless steel column of light in the centre of Middlesbrough completed last year, allows members of the public to select colour sequences by sending a text message from their mobile phone. It proved so popular that the installation crashed when it was first unveiled.

Freeman sees himself as both an artist and lighting designer, but one quite different from other lighting designers. ‘I am not using light as a utility, as illumination, but more to give a sense of excitement and a visual focus. It’s more like making signs,’ he says.

The next project dreamed up by Freeman, who lives in a cottage eight miles from Lands End, is an exterior lighting scheme for a student hall of residence in Bristol. A strip of lighting will run up the side of the six-storey building, changing colour every time someone enters or leaves the building. The idea is that the exterior lighting will articulate the rhythm of the week: on Fridays and Saturdays as students go out and enjoy themselves, changes in colour will be almost continuous, but the display will be slower at quieter times of the week.