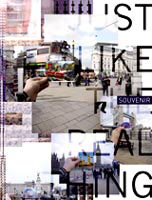 You should never go to the private view of an exhibition, especially on a muggy night. The Czech Centre is basically a large concrete underground chamber. And when it is rammed tight with 200 sweating, bestubbled, black-clad “graphistas”, you get some sense of how horrific a slow death in the Black Hole of Calcutta must have been.

If you are a really big fan of Why Not Associates, you ought to stroll on down to wonder at City/ Mesto: Visions of London and Prague. I can assume unless you are Czech, you won’t be a fan of its collaborator Studio Najbrt, and this exhibition certainly won’t make you one: it’s so gossamer-thin.

Sixteen translucent banners hang in pairs from ceiling to floor, each pair using type and images to illustrate a word like “transport”, or “faith”. Optimistically, the press release tells you that “the results are as much personal statements as a confrontation to stereotypical imagery”. I wish this were so, but the imagery is as stereotypical as it gets; beer and dancing for “after hours”, sitting on a tram or a map for “transport”. You can’t blame the designers. Given no real challenge or budget, they have risen to not much of an occasion. But you feel that the acetate sheets are like the wrapping for something else that got thrown away.

The content is so modest that it would have worked far better disguised within a little director movie, or even a pack of overlapping transparent, third-A4 slices like the invitation card. Why Not Associates’ very capable typographic paintings deserve a grander canvas than this, but then the display itself is not the point of these endeavours. The aim is to collect the sweltering crowd pushing and shoving to get to the cold beer.

The people were an exotic mix, in with the usual Levi’s Twisted-fit jeans and black turtleneck-wearing designers milled a lot of central European types; flat Slavic faces, white-blond hair, Mickey Dolenz frizzes, Crimplene suits, and the great rarity at design events – a healthy dose of people over 40 years old. I spotted publishers, photographers, journalists, civil servants, entrepreneurs, students, and I even glimpsed the film star Herbert Lom, famous as foil to Peter Sellers in the Pink Panther movies.

That is what all the effort behind this installation has been for – to create collisions and a raising of consciousness between people who might otherwise not meet. There will be holidays, book deals, design commissions, exhibitions, educational exchanges, and revisionist articles as an indirect result.

Imagine the effort the British Council will make in Prague, it always goes overboard. (When I designed an exhibition like this one for France, it was held in the palace of Napoleon’s daughter, hundreds of businessmen and journalists brought together over a meal prepared by an English chef jetted in for the evening.)

For the Czechs, City/ Mesto is money well spent, like a fire-starter, unprepossessing material can be the fuel for real heat, brand new social “synapses” and tens of thousands of possibilities.

City/ Mesto: Visions of London and Prague is at the Czech Centre, 95 Great Portland Street, W1 until 15 June