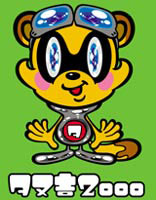 Take Groovisions, famous worldwide for its Chappie character (a fictional character who’s been in fashion shoots and ads, exhibited in the Parisian store Colette and has seen a multitude of marketing spin-offs). Groovisions is actually an eight-year-old design group working in CD packaging, fashion, film, Web design and art direction. Or Hideyuki Tanaka, a star in the gaming community for the Bust a Groove graphics in the eponymous PlayStation game and many other computer graphics. He is also head of design group Frame Graphics, with which he’s created CD packaging, TV advertising campaigns, concert visuals, pop videos and kids’ TV characters.

Tanaka is currently in charge of the art direction of the Super Lovers brand of clothing. When asked whose work he admires, he is unequivocal in his championing of graphic design, ‘Psygnosis’s video game Wipeout XL was excellent, especially the art direction by Designers Republic.’

Equally intriguing is the work of Enlightenment, a design team headed by celebrated graphic designer and film-maker Hiro Sugiyama. Describing himself as an illustrator and designer, he has collaborated on a number of exhibitions and films (including one with fellow Jam exhibitor Ichiro Tanida), but is disinclined to classify his work. Judge for yourselves in the current issue of fashion magazine Visionaire, the Sugiyama-designed website Shift, www.shift.jp.org, and his various personal and commercial editorial projects, including the acclaimed Track (1997) and last year’s Display.

What is he showing at Jam? ‘Like two-dimensional computer graphics,’ he replies enigmatically. Maybe his next line, ‘Sigmar Polke and Teruhiko Yumura have been influential’, offers a clue.

Slightly more quantifiable – if ‘mixing fine art, film, stage sets and graphic design’ is quantifiable – is the work of Namaiki, though again there’s a lot of crossover and collaboration with the neighbours. For the past three years Namaiki has been resident of a former taxi depot in the heart of Tokyo, and has formed part of a loose co-operative of creative minds in the world of architecture, interior design, music, and even a micro-brewery. It’s obviously a successful mix. Clients to date have included Nike, Sony Aibo and MTV, and it sounds like a lot of fun too, with events, parties, clubs and so on, suggesting a latter-day version of Andy Warhol’s Factory.