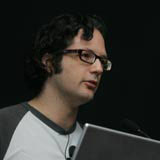 Rafael Lozano-Hemmer’s interactive installations, using light and shadows, are designed to engage the public intimately. Richard Clayton talks to him about his plans to illuminate the East Midlands

On the final day of a five-date public lecture tour to explain his latest work, Under Scan, the artist has only just ‘finished arriving’ (a Spanish interpretation, he implies, of ‘settled in’), and is already due to leave – but not before he’s delivered his talk with the aplomb of a motivation guru. A confused body clock must be the price of true global citizenship.

Born in Mexico, and now a Canadian national residing in Madrid, Lozano-Hemmer lives ‘between’ places. His ambitious, site-specific pieces grace cities such as Dublin, Lyon, Miami, Rotterdam and Valencia. So what is he doing in the East Midlands, then?

Playing with shadows is the short answer. Why? Because the East Midland Development Agency asked him to. Under Scan is a £1m public art commission that is due to appear in five local towns over the next few months, beginning in Lincoln on 25 November.

Active at night, a huge projector – 110 000 lumens making it the world’s brightest, according to Lozano-Hemmer – will cast pedestrians’ shadows in public squares. Into these shadows, a computer tracking system will project video portraits of different people, as though revealing alternative selves or rival presences. Spooky, eh?

‘Your shadow activates these portraits and they interact with you,’ Lozano-Hemmer explains. ‘They look back at you, and stick around. Some dance, some send you kisses, some ignore you. It’s a very simple, but effective, animation, with a little moment of complicity when you sense that you’re being observed too.’

The people in the videos, including many students, were filmed over the summer. Everyone who took part (numbering more than 1000) was free to behave as they wished. ‘The only thing we asked of them was to start by looking away from the camera, then to look directly at it, and then look away again.’

Like his projects in Mexico City (which, by the end, had seen 800 000 people ‘sculpt’ immense patterns with skyward lightbeams) and Rotterdam (where a building became a vast screen for the public to play with silhouettes), Under Scan is part of a series called ‘Relational Architecture’, albeit on a more intimate scale. Only 14 shadows in total can trigger the video portraits at any one time, though, of course, passers-by can still watch.

Collaborating with a team of technicians, which he likens to a film crew, Lozano-Hemmer wants people to re-engage with public spaces, in ways that urban design can’t imagine or consciously disavows. Tellingly, his formal training was in physical chemistry, rather than design.

‘A lot of the work we’re doing is design, to the degree that we’re developing a platform,’ he says. ‘I’m not interested in big, capital ‘H’ history questions, but in creating platforms which people take over. I call Under Scan an anti-monument, because it’s not about having one story reflected, as happens when you build a statue, but the myriad of relationships that emerge in this kind of eccentric environment.’

Citing influences as diverse as Buckminster Fuller, Dan Graham, and Samuel von Hoogstraten’s 17th century engravings, the well-travelled 37-year-old has as many notions as passport stamps, and he’s happy to cede control of his work to the user.

‘Many times, my preconceived ideas of what will happen are wrong, and I really like that,’ he says. ‘One of the things about shadows that’s cool is that – unlike most new media works, including my own – there’s no need for explanations, manuals or buttons. People already have a sophisticated vocabulary of what they can do with their shadow. We’re all familiar with playing by candlelight and every culture has a tradition of shadow-play.’

His complicated shadows might not bring the East Midlands its Bilbao effect, but they’ll certainly take the shine off the Blackpool illuminations, and plenty of London shows besides.