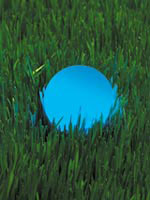 Gloop, gloop, gloooop. It’s strangely mesmerising. The globular bubbles of wax rise and fall with a rhythmic monotony in silent homage to kitsch psychedelia. The lava lamp – love it or loathe it – is synonymous with the 1960s.

The Astro lamp, designed in 1963 by Edward Craven-Walker and officially declared a ‘design classic’ by the Design Council last year, is still made from the same basic formula of water, paraffin wax and 14 ‘secret ingredients’.

Since 1989, the company responsible – now known as Mathmos after the bubbling force in the cult 1960s film Barbarella – has been under new management. The woman at its helm is not quite what you’d expect. Cressida Granger is cool and measured, her understated bearing in stark contrast with the overblown, camp image of the lamp that has made the brand famous. Aged 38, she shares her birthday with Craven-Walker’s invention.

She graduated from The University of Manchester with a degree in art history before going to work as a design dealer, specialising in the 1960s and 1970s. Given that it was the 1980s, era of ‘tasteful’ chrome and matt black furniture, Granger found herself in the company of a select few specialists. ‘We were defining the era, developing a sense of what was worth hanging on to, what was iconoclastic,’ she says.

With a vision unclouded by nostalgia, she quickly learned the harsh commercial truth about what sold and what didn’t. While on a routine buying trip in Glasgow, she first stumbled upon a lava lamp, still in its original box. Intrigued, she called the number on the box and was amazed to find the company was still in business. Brimming with confidence, she placed an order for £1000 worth of stock. A pattern of commercial design classics had emerged as enduringly popular, and among these the lava lamp stood out.

Granger soon abandoned plans to set up a shop selling 20th century design, and instead persuaded her business partner David Murray to join her in the manufacture and wholesale of lava lamps. The first visit to Poole was hardly promising: the company consisted of five people and was firmly in the red. The next ten years were spent changing its fortunes, fighting buyers’ negative associations, while appealing to a slowly growing affection for the decade.

The turning point for Granger, and ultimately Mathmos, came when Murray left the company in 1999, giving her sole control. She was keen to develop Mathmos as a design-led, kinetic lighting brand. Granger identified the key elements of lava lamps that people respond to as chaos, colour and movement, and made a commitment to work with ‘the best talent around’. She set about restructuring the in-house team, and advertised for fresh blood on the Mathmos stand at the 100% Design Show that year. Jonathan Coles, originally from lighting design group Isometrix, was appointed head of design, and Simon Maidmont became a consultant, in a challenge to help establish Mathmos Modern.

First off the blocks was Ross Lovegrove’s take on the vintage Astro lamp, Fluidium, which was launched in spring 2000. It was a great success and last year, the company made a confident break from the lava lamp with the launch of Bubble at 100% Design. This glowing silicone sphere is contemporary in its simplicity. It is charged just like a mobile phone and is cordless and portable.

Bubble now has a new home, Nest, a spun anodised aluminium dish designed to hold the light and keep it clean (as silicone attracts dirt) which will be launched at this year’s 100% Design. Joining it will be Tumbler (DW 9 August), a rechargeable, portable glass brick that is waterproof. A clever, contemporary alternative to that 1990s gift must-have, the candle, it feels strangely appropriate to a brand whose reputation was built on molten wax. Tumbler is available in two versions: Flip, which changes colour as it is turned over, and Faze, which changes colour constantly, speeding up or slowing down according to the facet uppermost.

Also making its first appearance on the Mathmos 100% Design stand this year is Spin City, a new range of lights by nine London-based designers. Each designer was given only a month to respond to a brief, which stipulated that they had to make use of spun aluminium – a moulding process that begins with a flat circle of aluminium. Besides this, the concepts had to be simple to develop, quick to market, affordable and easy for the consumer to understand, while also embracing the ‘Mathmos ethos’. The resulting range is more functional than the brand’s previous designs and Granger hopes to fill a gap in the market for mid-priced, quality lighting, that she bills as ‘somewhere between Ingo Maurer or Flos and Texas Home Store’.

Although the designs could only be viewed as computer-rendered drawings (they are in prototype development and will be ready in time for the show), there was enough there to whet the appetite. The Azumi’s sublimely simple response is a floor-level circular fluorescent, concealed by a ‘polo’ of spun metal which allows light to spill up from underneath, while Simon Maidmont’s sophisticated spun-metal pendant lamps are fractured by a fluorescent acrylic band. El Ultimo Grito’s light shade is so easy to fit, it can simply be lifted on to an existing bulb. ‘I want to be able to sell to students and people in rented accommodation who have to move on in two months’ time but want to personalise their homes,’ says Granger.

Several designs have a whiff of the 1960s, but not in terms of overtly retro styling, more in their use of simplistic forms. Some elements of whimsy have crept in. Gitta Gschwendtner’s wobbling lamp has a red, flocked interior and Inflate’s Nick Crosbie has married the spun metal with his trademark use of dip-moulded plastic to humorous effect. The range, with each light named after the individual designers’ London postcode, is likely to be put into production as early as next spring, and although it is intended for domestic use it’s likely that some designs will find their way into retail interiors.

Granger has successfully turned a quirky product into a profitable company. Now in a period of re-investment, it is attracting healthy interest overseas (half the business is export, the biggest market is in Germany, and it has now cracked the US and Japan), while back home, it continues to supply the gadget and gift shops, and alongside stalwart department stores John Lewis and House of Fraser, it is also getting orders from the likes of The Conran Shop. With plans for this small British manufacturer to join the big boys at next year’s Milan Furniture Fair, it is clearly time to take this brand seriously.

Guerillas in the midst of Aurora Marketing