The white icon of a person in a wheelchair set against a blue background is known worldwide as the universal symbol for disability. Found on toilet doors, painted onto parking bays and seen on public transport signage, the image is known as the International Symbol of Access (ISA), and indicates that a facility is accessible for those with disabilities, or solely for their use.

But is this icon of a person in a wheelchair inclusive? Designed by Danish design student Susanne Koefoed in 1968, the symbol celebrates its 50th anniversary this year, and many people now feel it should be updated to reflect people with “invisible disabilities” – those who are not in a wheelchair, whose condition cannot be seen or is discrete. 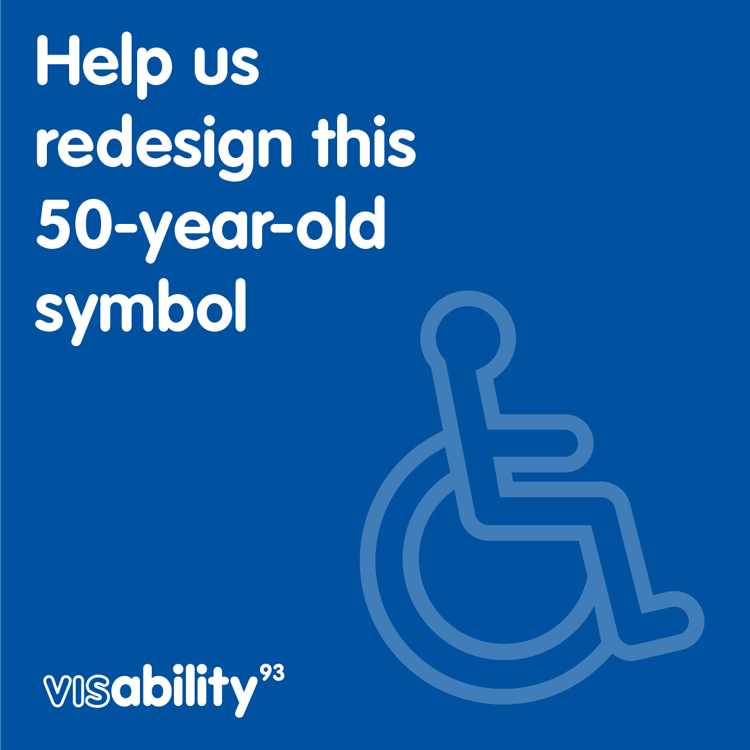 According to the Equality Act 2010, somebody is classed as having a “disability” when they have a “physical or mental impairment that has a substantial or long-term negative effect on their ability to do normal daily activities” – clearly, life-long conditions that affect people daily are not limited to those requiring use of a wheelchair. But many people are not aware of this scope.

For employees at McCann London, this is an issue close to their heart. That’s why the advertising agency has launched a campaign called Visability93 that looks to rethink the ISA, and create a symbol that is more representative of those with invisible disabilities, including the likes of diabetes, arthritis, mental health conditions such as schizophrenia, depression and anxiety, and learning difficulties like dyspraxia.

“Many of us at McCann have family members with invisible disabilities, and see the hardships they go through,” says Liam Riddler, art director at McCann London. “My brother has Crohn’s disease, and because he doesn’t ‘look’ disabled, people don’t understand why he needs to use accessible toilets or priority seating, even though he is in a lot of pain. We wanted to get together to do something about this.”

A typeface made up of 27 disabled icons 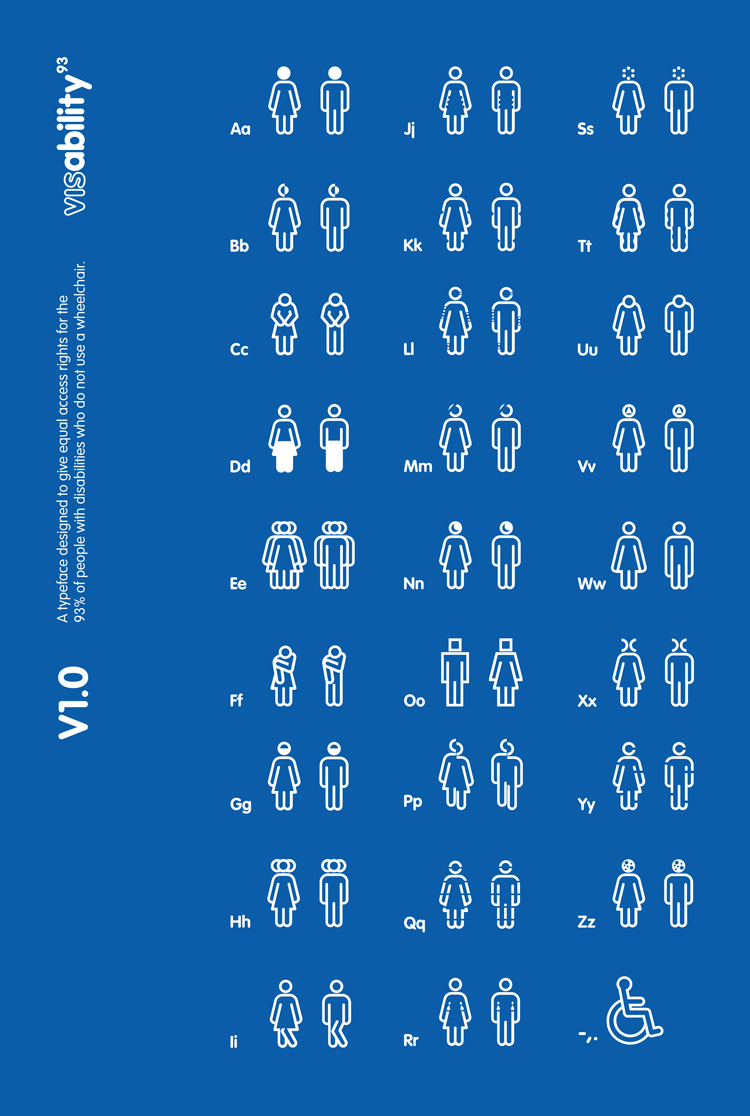 Riddler worked with Lisa Carrana, deputy head of art at McCann London, to create a suite of 27 new icons which look to represent different disabilities – from epilepsy to diabetes and Alzheimer’s.

The icons, which have been designed as a custom typeface rather than images so they can easily be used for signs and in text, are freely available to download on the Visability93 campaign website, with the creators encouraging the public to use and disseminate them.

As the icons have been designed as a full typeface, they can be used in the place of letters, using keys on a person’s keyboard. Every letter in the alphabet indicates a different disability symbol, with uppercase for women and lowercase for men. Additionally, the symbol combination “-,.” creates the existing wheelchair icon, making this the 27th icon in the set.

Worked with charities and focus groups 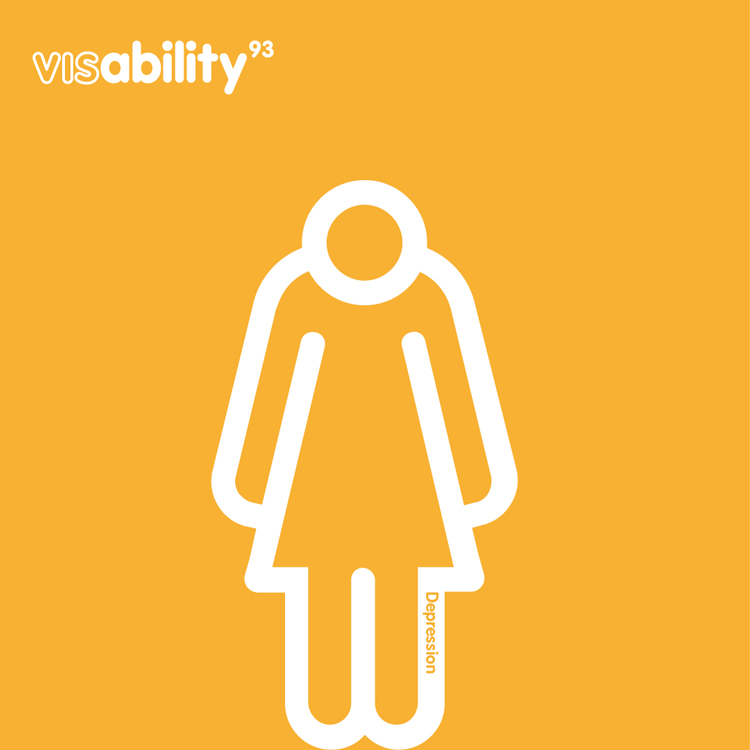 The two designers worked with people they know living with disabilities to create the suite of icons, taking into account their feedback when they felt something was inappropriate.

“Our original symbol for diabetes showed an icon with coloured-in feet, to show that, without management, diabetes can sometimes lead to foot ulcers, and eventually foot loss” says Riddler. “Somebody with the condition then told us this was distressing for them as it was their worst fear, so we changed it so the icon was coloured-in half-way up the body to represent high blood sugar instead.”

To choose the 26 conditions, McCann used charity websites such as Scope and American charity the Invisible Disability Project for research, but Riddler says that there are many more conditions to include, and that the project is still in progress.

Since the original 27 icons were designed, a few more have been added, and the suite of icons will continue to grow, he says. They will be created in collaboration with charities and disabled communities.

Could there be a new international symbol? 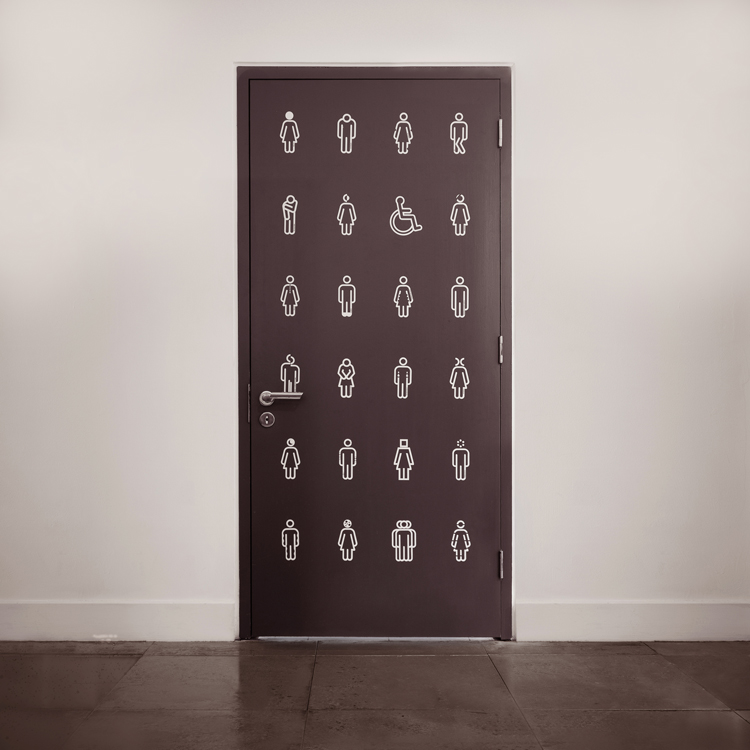 Visability93 is so-titled to reflect how 93% of those with disabilities do not use a wheelchair. Alongside the free icons, the website looks to raise awareness of invisible disabilities through posters and t-shirts displaying the symbols, which can bought online, with proceeds going to the corresponding disability’s charity. A free poster raising awareness of the scope of disabilities can also be downloaded, and stuck around public spaces and offices, such as on toilet doors.

As well as encouraging people to download and use all the assets, the campaign is also seeking designers, illustrators, charities and the public to submit their thoughts on the icon suite the agency has created, and also submit sketches and concepts for a new universal symbol for disability.

“An evolution, not a revolution” 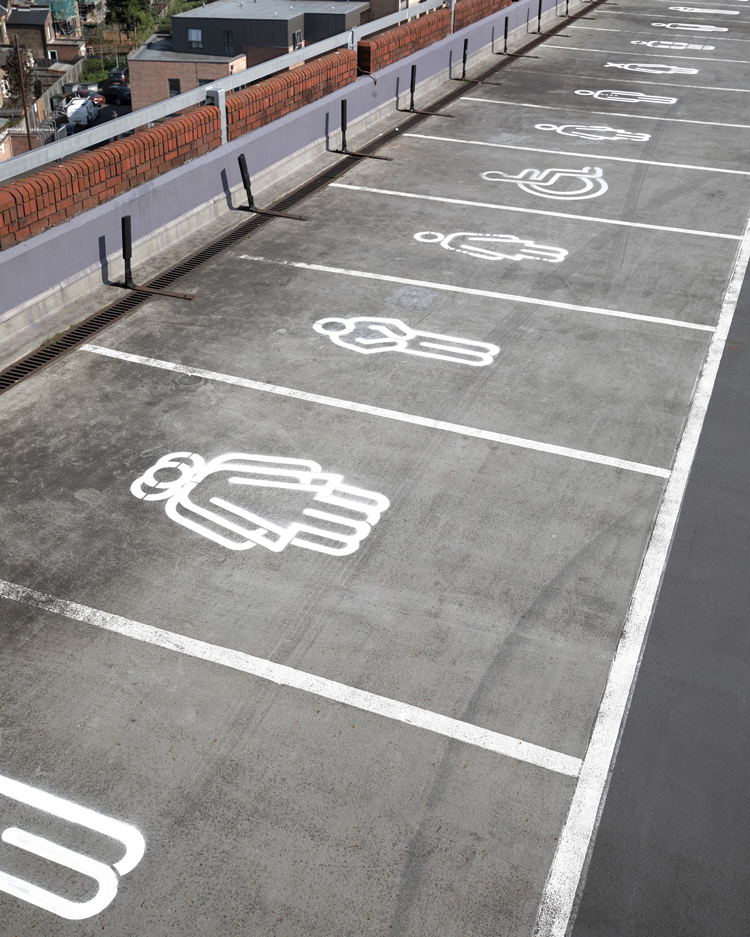 After whittling down and refining entries, the aim will then be to approach the International Organisation for Standardisation (IOS) in Belgium, the body that decides on worldwide symbols and signage, with a new concept for an icon that represents disabled access. Riddler says this needs to be “an evolution, not a revolution” of the existing wheelchair icon.

“That symbol is so recognisable around that world that we can’t change it too much,” he says. “The most important thing is that it’s still recognisable as the ISA (International Symbol of Access). We could add to it or tweak it so that there’s another person on the symbol, or the circle graphic is used in a different way. But we know it is a highly effective symbol and we need to respect that.”

The project is completely pro-bono, meaning neither McCann London or the chosen designer will get paid for the work, but whoever creates the new symbol will be “fully credited”.

Symbol has “helped” some but caused “judgement” for others 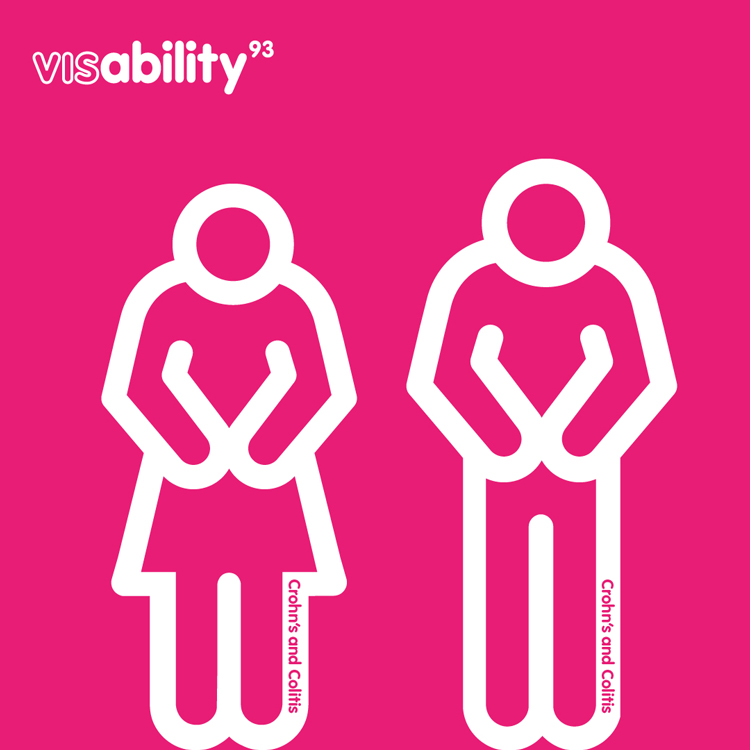 Riddler says that while convincing the IOS to change an international symbol will be a tricky task, McCann London is working with worldwide charities and disabled communities to help raise awareness and backing for the project, and convince the organisation that change is necessary.

“The symbol is 50 years’ old now,” he says. “It has helped so many people in wheelchairs, and had such a positive impact on how they navigate around public spaces but it has also caused a deflection issue for disabled people who don’t use wheelchairs. These people already struggle, and they receive public judgement on top of that. People who question those with invisible disabilities have good intentions but they are very misinformed. This is an education and awareness job.”

“Design can make a huge impact on people’s lives, as this symbol has,” he adds. “But all design needs to be looked at and updated as culture changes.”

McCann London hopes to arrive at a new, proposed symbol of access by the end of 2018, with a view to present it to the IOS with backing from charities and disabled communities in 2019.

View the Visability93 campaign, download icons and posters, and submit your thoughts here.