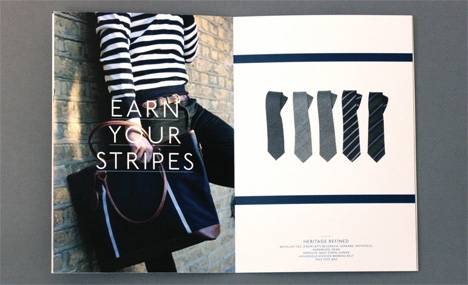 Felt and Plum Brands have rebranded the men’s fashion house Smart Turnout. Felt worked on the visual aspects of the branding while Plum Brands developed the strategic direction.

Plum Brands director Lori Rosenwasser says the consultancy was appointed directly and then brought in Felt to work on creating a refreshed identity and a new look and feel.

Felt restyled the typography of the brand and redrew the lion logo after initially crafting three possible options for the new look and feel of the brand. The logo was developed with the help of artists from the College of Arms at St James’ Palace.

Smart Turnout has its roots in British regimental and collegiate clothing and accessories, and the brand is being relaunched with a ’look book’ that embodies the new brand story and look.

This will be used to introduce retailers and consumers to the brand, aiming to open the door to more high-end retailers in the UK and overseas.

The branding is set to launch next week and other applications soon to follow will include the e-commerce website, sales brochure and retail environments.

Felt co-founder Libby Milla says, ’Smart Turnout wanted to move away from its traditional supplier role and reposition itself towards being a real fashion brand, while keeping its traditional history.’

The colourful stripes and bold patterns that are Smart Turnout’s hallmarks have been retained, while the new identity seeks to keep the brand modern, fresh and relevant.

Where are the designers in the Olympic posters team?