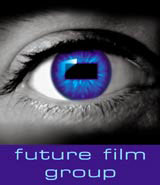 London design consultancy Kugel has created the corporate identity for a new film development company, Future Films Group, which is due to be launched next month. The organisation will provide funding to the British film industry.

In addition to the blue used for the corporate branding, each of the four sub-brands – finance, distribution, post-production and E-future film – is represented by turquoise, green, purple and orange colouring respectively.

Kugel managing partner Matt Nimmo is “delighted” to be involved with the film industry, adding: “The branding has been developed to function across traditional elements such as stationery, literature and signage, and is simultaneously being worked up into 3D formats for film, video and website use.”

Allen to see to Spanish optician