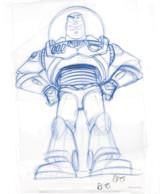 Pixar’s string of box office hits makes the animation studio a big fish in the film-making world, but will the merger with Disney dampen its creativity? Nick Smurthwaite mulls over its past ahead of a London retrospective

In two decades, Pixar Animation Studios has achieved the impossible by usurping Disney’s position as international master of animation. Despite appearances to the contrary – Disney recently bought out Pixar for an estimated $7.4bn (£4.2bn) – there is no question that the maker of Toy Story, Finding Nemo and The Incredibles has reinvented the art of mass-market animation.

You can get an idea of the artistry, ingenuity and technical accomplishment of Pixar’s operation from an exhibition opening at London’s Science Museum this week. Hundreds of hand-drawn sketches and storyboards, as well as 3D maquettes and artefacts, have been assembled to celebrate Pixar’s 20th anniversary.

Why the Science Museum? Because the art of Pixar is filtered through the science and technology of the digital age, says curator Rob Warren, who has been responsible for tailoring the exhibition – already a big hit at New York’s Museum of Modern Art – to suit the Science Museum’s needs. The two focal points of Pixar/ 20 Years of Animation are Artscape, an 11-minute, audio-visual installation that brings together all the concept artwork in a finished film, and a huge zoetrope-type contraption that creates the optical illusion of static images in motion, featuring 180 characters from both Toy Story films.

Warren is anxious not to overplay the science and technology hand at the expense of Pixar’s artistic achievements. ‘There is a common misconception that their films are made by computer operators – that they simply press ‘print’ and out comes a movie. The reality is very different. Pixar always saw computers as a means to an end. Eighty per cent of what Pixar does is traditional artwork, while the other 20 per cent takes place on computers. The exhibition makes evident this outpouring of talent and creativity

that has little to do with computer know-how in its early stages.’

Talk to Ralph Eggleston, Oscar-winning production designer of Toy Story and the even more successful Finding Nemo, and it’s clear his influences were retro, not techno. He talks about trying to emulate ‘the slight glow’ that accompanied real-life characters in the pioneering days of Technicolour in Finding Nemo’s underwater world.

John Lasseter, director of both Toy Story films, who has been dubbed ‘the Walt Disney of computer animation’, grew up on Disney features and TV favourites like Bugs Bunny, Road Runner and The Flintstones. Later, he learnt the craft of animation from Disney stalwarts at the California Institute of the Arts, and went to work for the company in the early 1980s. When Disney spurned his ideas for combining drawn animation with computer technology, he transferred his allegiance to Lucasfilm which was starting up a computer division. In 1986, Steve Jobs, co-founder of Apple, bought out Lucasfilm’s computer arm and set up Pixar as an independent company, whose sole aim was to produce computer-generated films.

By this time, Disney must have realised the error of its judgment, offering to distribute Toy Story under the Disney banner, and later bankrolling a five-picture deal with its young rivals. Though it has continued to produce its own animated features (Brother Bear, Home On The Range and, most recently, Chicken Little), Disney has signally failed to hold a candle to Pixar’s string of box office bonanzas.

Just as previous generations awaited ‘the new Disney’ – whether it was Jungle Book in the 1960s or Lion King in the 1990s – now it’s ‘the new Pixar’ that excites the digital generation. The advertising build up to the UK release of Cars in June has already started, with trailers on the big screen and all manner of hype on the Internet.

The perceived problem with Pixar’s new marriage of convenience with Disney is that the latter’s family entertainment ethos might inhibit the artistic growth of Pixar. Finding Nemo, for all its technical prowess, lacked the narrative richness and sophistication of Toy Story (the original and the sequel) and Monsters Inc.

When the merger was announced, Steve Jobs put out a somewhat ambiguous statement that seemed to suggest a jockeying for position. ‘Disney and Pixar can now collaborate without the barriers that come from two different companies with two different sets of shareholders,’ it read. ‘Now everyone can focus on what is most important – creating innovative stories, characters and films that delight millions of people around the world.’ 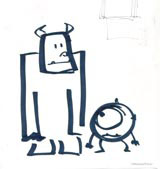 Author and broadcaster Brian Sibley, who has written extensively about the animation industry, is optimistic that the talent at Pixar’s disposal will prevail. ‘Now that the novelty of digital animation is becoming commonplace, the challenge facing Pixar will be to keep on creating great characters and telling compelling stories,’ he says. ‘In Hollywood, there are never any guarantees, but if Pixar can’t do it, then nobody can.’

The exhibition, Pixar: 20 Years of Animation, runs from 1 April to 10 June at the Science Museum, Exhibition Road, London SW7.

For details of events featuring leading members of the Pixar team, as well as film industry insiders from the UK, visit www.sciencemuseum.org.uk/exhibitions/pixar