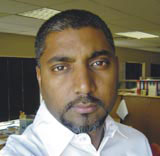 Black may be a controversial name for a South African consultancy, but founder Veejay Archary is used to change and challenging perceptions through design in his country, says Sean O’Toole

The word black is something to conjure with. This is especially true in a country with a history as fraught as South Africa’s. Not that this is the reason Veejay Archary decided to name his new brand strategy and design consultancy Black. ‘It was more of a business decision,’ explains Johannesburg-based Archary, whose greying beard bears testimony to 15 years spent working at the coalface of change. Among other things, Archary designed the ballot paper for the first multi-racial democratic elections in 1994.

‘The assumption might be that the company’s name is based on who and what we are about,’ he says. Such a reading, though, is only of secondary merit. ‘I wanted to make people realise the impact of what design does. Design is key to business, it moves your company into the black.’

Back in 1991, however, the idea of moving into the black meant something else for Archary. A junior art director at Ogilvy & Mather, he left the company with three of his colleagues to form HerdBuoys. The six-person start-up, which in 1997 sold a 49 per cent minority stake to McCann-Erickson, was South Africa’s first black-owned and managed advertising agency.

At the outset, clients were hesitant. ‘We were new and people tested the waters with us,’ recalls Archary. Rather than win the desired campaigns – ‘the baked beans’ jobs as chairman Peter Vundla described them – HerdBuoys found itself tasked with special projects. These included work on voter education campaigns and, later, the branding of the much-publicised Truth and Reconciliation Commission amnesty hearings.

Archary confesses that these historic briefs were difficult to tackle, largely because they were without precedent. ‘We flew by the seat of our pants, finding our way around it,’ he says. His breakthrough into commercial design happened in 1996 when HerdBuoys won the South African Airways brand account. Charged with the redesign of its identity, HerdBuoys partnered with Diefenbach Elkins on the job.

The redesign presented many challenges for Archary, who studied graphic design in Durban. SAA is a notoriously difficult client. During the reign of the orange Springbok, the carrier’s old emblem, a committee of 18 people took advertising decisions. Archary recalls bumping heads with the white jobs-for-life executives steering the redesign process.

‘It was a big deal to make them understand that the airline did not belong to Transnet, the holding company – that it actually belonged to the people of South Africa. We had to change the way everybody looked at the airline,’ Vachary remembers.

Dealing with grumpy, corporate custodians proved less difficult than identifying a unifying symbol around which the redesign could take shape. ‘We tried very hard to retain the Springbok, which had a huge amount of heritage associated with it. We tried to make it fly – we gave it wings, all kind of things, even the new colours of the interim flag. It refused to fly, no matter what happened,’ says Archary, a former chairman of Think, the South African Graphik Design Council and the current vice president of Icograda for Africa.

The gazelle was definitively dropped after scoring poorly in tests. New alternatives were shot down in rapid succession, including Archary’s proposal of a strelitzia (bird of paradise flower). Part of the difficulty in arriving at a conclusive design lay in the fact that South Africa was still deciding on a national flag. ‘We had to create a flag carrier without a flag,’ he says. 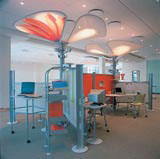 Reflecting on the final product, which incorporated the colours of the interim (and now national) flag, Archary is proud. ‘Our strategic thinking was years ahead. The DNA of the brand, which we wrote ten years ago, remains as fresh as it was back then.’

His historical involvement with the rebrand will doubtlessly stand him in good stead for the future. In March, Black was appointed as SAA’s branding and design agency after HerdBuoys McCann-Erickson resigned the SAA account.

The change is not quite as seismic as it reads. Archary has been handling the SAA account since 2000. The departure of Vundla and other founders of HBME prompted Archary to sell up too. Although an independent company, Black currently works from a rented space in the HBME offices. Other accounts include AMB Capital, as well as governmental agencies and sports brands.

Remarking on how the past 15 years have influenced design and branding in his country, Archary is clear. ‘We are still trying to recognise who we are, but the miracle and the truth is that the answer lies in our diversity.’