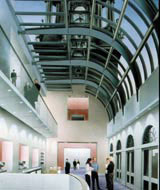 English National Opera will raise the curtain early next year on the £41m restoration of its Grade II listed home, the London Coliseum, with design by architect Arts Team at RHWL.

The revamped building, originally designed by Frank Matcham in 1904, is handed back to the opera company in mid-December, ahead of rehearsals prior to its reopening – with a production of US composer John Adams’ Nixon in China – on 7 February 2004.

An ENO spokeswoman says the overall aim of the project has been to restore the Edwardian colour-scheme and decor – ‘rich imperial purple, Italian reds and shades of gold and cream’ – while increasing the public space by 40 per cent, including enhanced bar areas and improved visitor circulation.

The foyer area has been reorganised to cope with the increased capacity and all the bar areas enlarged. A new curved-glass roof allows views of the Coliseum’s tower, while outside the terracotta faÃ§ade has been restored, with bespoke ornamentation replacing the long-lost originals.

Arts Team partner Nick Thompson says the first challenge was to ‘respect Matcham’ and ‘put back the splendour’ of his design in a contemporary way.

The second task, he says, was to translate the spirit of a building conceived as a variety house – ‘a people’s theatre’ – into a modern home for opera. But given that ENO’s ‘whole idea is to make opera accessible’, this was going with the grain of Matcham’s work.

Separately, Dewynters is working on ENO’s branding, including brochure design and promotional material associated with the broadcasters Sky and Artsworld’s three-year sponsorship of ENO’s artistic programme.

No change will be made to the ENO identity.

‘We want to make a visual impact and create excitement about the new features of the building and the upcoming season,’ explains Andrew Higgins head of marketing at ENO .

Launch in store for Kinnersley Kent