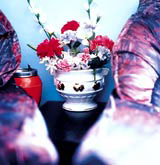 “The reality is most people don’t buy into the modern aesthetic.” A glance at the images Mitchell Bates has chosen for this exhibition makes his observation sound like a gross understatement.

Taste Matters was a year-long project commissioned by the Swedish chintz enemy number one, and included focus groups and a national survey of 1000 households carried out by market research group Mori. From this, Bates drew up six style groups and catalogued householders’ revealing comments. Home is My Castle describes the clutter queens; Not Really Interested speaks for itself; Modern and Co-ordinated are those who eschew the traditional; Child-Bound are dissatisfied with the look of their home, but are constrained by finances; Just Normal is the least discriminating group; and Self-Expressive see their home as a site of creative opportunity and fulfilment.

And the householders’ justifications for the way the room looked are just as telling. “To me, a carpet is what makes a room. The idea of floorboards horrifies me,” said one interviewee in the Just Normal group. While a clutter queen explained: “I collect pigs, they’ve all got meaning for us.” But this is not an exercise in mockery. “We’ve tried hard not to be cynical, but to be genuine and non-judgmental,” says Bates. And, anyway, those white-walled, floorboarded, conversion dwellers among us are actually in a tiny minority. Most of the nation just wants their home to be warm and cosy and neat and tidy, Bates discovered.

Naughten’s last exhibition consisted of portraits of Namibian tribesman. “Photographing someone’s living room is almost like doing a portrait,” he says. And, indeed, the pictures, none of which were propped, suggest strong narratives about people’s lives. While the dwellers themselves don’t appear in any of the photos, it is easy to have a guess at their backgrounds, views and pastimes.

Some shots incorporate a large part of the room and others are tighter crops, focusing on specific objects. Bates and Naughten got the householders to talk about their possessions and elaborate on their significance, which may have thrown up another revelation for Ikea. “For the majority of people, their homes are a mix of making do with stuff stuff they don’t really like,” says Bates.

Despite the stomach-turning decor of some of the interiors, Naughten has achieved some truly tasteful compositions. Perhaps because they are so personal, they manage to engage and at times even endear the viewer. And what they highlight is a general love of pattern and colour, and strong disinclination towards minimalism. If nothing more, the show is a sharp reality check for taste commentators and Ikea itself.