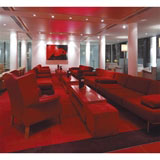 City Inn Hotels has appointed Purpose to review its brand identity, as the company embarks on a £330m, four-year expansion programme, including plans for its first international venue in Amsterdam.

The consultancy was appointed to undertake the brand review following a creative pitch against undisclosed competitors. It will assess all of City Inn’s branding and communications, including the visual identity.

According to Purpose creative director Rob Howsam, City Inn’s ‘core values’ are not communicated effectively in its current graphics and marketing.

‘Our research showed that customers’ internal experience of the hotel did not match up to their external perception of the brand. So, we will be looking at the whole visual identity and the way it represents itself. Everything is under review except for the name, which has built up a lot of equity,’ says Howsam.

Under its expansion plan, City Inn will open a site in Manchester in spring next year, with venues in Leeds and the City of London also in the pipeline.

The company currently has sites in Bristol, Glasgow and Birmingham, along with its Bennetts Associates-designed £60m flagship hotel in Westminster, which won a Royal Institute of British Architects Award in 2004.

The 550-room hotel in Amsterdam will act as an international flagship for the company.

The company is also eyeing up locations in the US, which reportedly include Chicago, Boston and Washington.