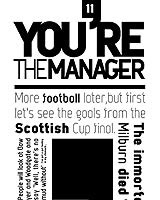 Fjord Network has created a brand identity and website for an interactive Channel 4 programme You’re The Manager, which mixes fantasy football and reality TV and which launches next month.

The programme will offer viewers the opportunity to influence managerial decisions at Nationwide Conference team Stevenage Borough over a six-week period. It will be shown four days a week on Channel 4, with extra programmes on E4, along with a website and text messaging service. The original concept, ‘an interactive documentary’, was an idea by Fjord co-founder Mark Curtis.

Fjord has developed all aspects of the programme’s branding. ‘In addition to coming up with the interactive concept, we have designed the identity and on-screen graphics,’ says creative director Olof Schybergson. Art director Louis Lygo also worked on the design. Schybergson is now ‘overseeing the implementation’ of the TV graphics and print material by Channel 4’s in-house team 4Creative.

The project will go live on either 11 or 18 February, says Schybergson. He adds, ‘The timescales for developing all TV graphics, website graphics and print solutions have been extremely short.

‘Several teams have had to come together and work very efficiently to make it happen.’