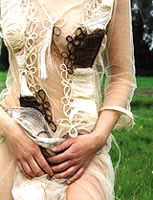 MacramÃ©, lace and clog-making – hardly cutting-edge design? Think again. These and other traditional techniques are the basis of a new movement in Dutch design on show this week at the Crafts Council’s exhibition Home Made Holland.

What links the 30 exhibitors’ disparate work, according to Home Made Holland curator Bernardine Walrecht, is a common use of hand-crafted techniques as a starting point in the creative process. These are then juxtaposed with contemporary forms and unexpected uses and materials to create a narrative layer within the work – a sense of the hand-made away from the perfection of mass-production.

‘After years of impassive, tight forms and materials, the soul is creeping back into design. Old techniques and materials form the key for the desired “lack of control”,’ says Walrecht. ‘Designers want to have the feeling that they have a product that has been touched by human hands.’

Found objects, as well as traditional techniques, are used in this way, she adds, to keep alive products such as traditional wooden clogs that might be fading from consumer life by incorporating them into new pieces of design, as shown in the Bootleg Clog sculptures of Ineke Hans.

‘The designers feel these should still have a life and not just be buried with time,’ says Walrecht.

The results are innovative, even rebellious, rather than traditionally crafty. One of the most narrative of the exhibitors is Jurgen Beij, who incorporates old lamps and chandeliers into his lights, which, when illuminated, shine through the new mirrored plastic outerlayer to set up a link between past and present. Gijs Bakker’s Wallpaper Peepshow features decorative holes to reveal the previously decorated wall beneath – a criticism of the waste involved in redecorating.

Often the juxtaposition between old and new is achieved through the use of unexpected materials, as in Marcel Wanders’ celebrated knotted chair, which challenges attitudes to macramÃ© by using ultra-light carbon-fibre and a contemporary design. Similarly, Niels van Eijk gives a new twist to the traditional technique of Brussels lace by using fibre-optic yarns to produce the exquisite sparkling Bobbin Lace Lamp.

Another new approach to lace is demonstrated by Kim van Leuken, who uses horse mane to set up a deliberate contrast between lace’s usually soft and pretty aesthetic with the coarse and rawness of horse mane hair.

Hella Jongerius, regarded as one of the front-runners of the new movement, celebrates signs of age by casting classic vessel forms in polyurethane and embracing the marks left by the moulds as features of each piece.

The exhibition is arranged in three period roomsets designed by Bas Berck – a kitchen, a living room and a bedroom – which create another narrative layer to the proceedings. Crafts Council exhibitions director Louise Taylor predicts that the show will have a major impact on British designers. You’ll just have to go along and judge for yourselves.

Home Made Holland runs from 31 January until 24 March at the Crafts Council, 44a Pentonville Road, London N1