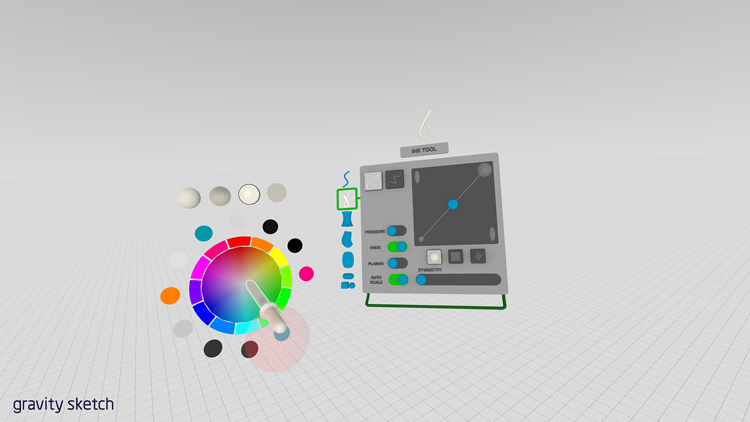 A new sketching tool for product designers has launched, which aims to “bring ideas to life quicker” through the use of virtual and augmented reality (VR and AR).

Gravity Sketch is software that has been made to help product, industrial, computer-generated imagery (CGI) and automotive designers complete projects more quickly by enabling them to create 3D designs in the air rather than sketching on paper.

Similar to computer-aided design (CAD) programs, Gravity Sketch has a suite of tools such as free-hand drawing, lines, curves, gradients and colour choices, which allows for both rough sketching and more precise model creation.

The software requires users to wear a VR or AR headset such as Oculus Rift or HoloLens, and use handheld controllers or hand-tracking devices such as Leap Motion. They can then choose from the tools and design three-dimensional objects in the space in front of them.

The new tool aims to “democratise design”, says Gravity Sketch co-founder Oluwaseyi Sosanya, by being simpler to use than traditional CAD programs, and by cutting down the time it takes to make products.

Daniela Paredes-Fuentes, co-founder at Gravity Sketch, adds: “Over the last 50 years, to create 3D digital content, people have been using complex, technical CAD software developed for mouse and keyboard and heavily based on maths and logic, leaving no space for creativity and freedom.

“Gravity Sketch takes advantage of immersive technologies to allow the user to create 3D content in an easy and intuitive way by using gestures in real space,” she says.

The tool aims to help designers “bring their ideas to life quicker”, as it gets rid of the need to produce many 2D sketches showing various views and details.

Working in 3D at the start will mean the process is “quicker and more efficient”, Paredes-Fuentes adds, and fewer models will need to be produced as the 3D real-space sketches will be easier to interpret than 2D paper sketches.

“Many existing CAD tools are designed so that they limit access for people who don’t have a certain level of vocabulary or a particular education,” she says. “But people who are best at imagining objects, spaces and forms can usually create a clear mental image of their creation and manipulate and scale it, all with their imagination.”

The tool also aims to aid communication between different professionals such as 2D graphic designers, 3D technicians and clay modellers, and cut down design time by roughly 30% compared to traditional processes, according to Gravity Sketch.

Gravity Sketch is now available to buy for £29 for anyone using Oculus and Steam VR platforms, which are run on Oculus Rift and HTC Vive headsets.

Future versions of the software will work with other VR and AR platforms and headsets, such as HoloLens and Magic Leap. It is not yet confirmed when this will be.