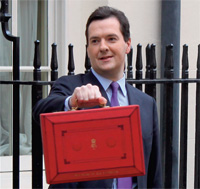 Measures announced in last week’s Budget are being largely welcomed by the design industry – but with some caution.

In his Budget speech, Chancellor of the Exchequer George Osborne placed an emphasis on growth, announcing measures which include reducing Corporation Tax, simplifying the tax system and exempting start-ups from domestic regulation.

The move to reduce Corporation Tax has already led WPP chief executive Sir Martin Sorrell to announce his intention to bring the company’s headquarters back to the UK from the Republic of Ireland to take advantage of the 2 per cent cut in Corporation Tax.

In a separate move, a three-year moratorium will be introduced exempting micro-businesses and start-ups with fewer than ten employees from domestic regulation.

It is also expected that investors will feel encouraged to invest in start-ups. Of this, Merron says, ’The extension of Enterprise Investment Scheme relief means that the income tax relief for angel investors increases from 20 to 30 per cent and you now get that relief for investment of up to £1m; it was up to £500 000 before.’

She forecasts the establishment of more start-ups and business expansion ’as we move out of recession’. Merron expects investment in the design sector from serial entrepreneurs and says ’design companies are the right sort to be invested in’.

However, Merron says it is ’disappointing’ that a decision to increase National Insurance contributions to 13 per cent from 8 per cent in the last Budget has been followed through. ’They could have reversed that,’ she says. ’It would have been better, at a time when we’re encouraging people back into employment, not to make it more expensive to do so.’

Ian Cochrane, chairman of the Ticegroup, gives business consultancy to design groups. He calls the Budget ’a welcome fillip for the industry’.

’A Budget that is good for our clients is good for design consultancies,’ says Cochrane, who also highlights research and development tax credits and the establishment of enterprise zones as positive outcomes.

Elsewhere, the Budget has set out a five-year international approach to intellectual property, including an Intellectual Property Office commitment to improve the range of products and services available to UK businesses.

Anti Copying in Design chief executive Dids Macdonald says, ’I welcome the Government’s raising awareness about the importance of IP issues in the UK, but what is patently missing is any reference to addressing IP enforcement difficulties faced by thousands of micro-firms and small businesses in the UK.’