As summer arrives in the UK, one drinks sector is poised to make a splash among consumers. Some 46% of cocktail drinkers say they are likely to try hard seltzer, a low-alcohol mix of sparkling water, flavouring and spirits. With fewer calories than traditional alcoholic drinks, hard seltzers also have a practical advantage over cocktails; they usually come in pre-mixed ready-to-drink (RTD) cans (a sector that is worth an estimated £235m). While White Claw may be the leading name, a slew of UK choices have launched lately, with designers playing a key role in reaching new audiences.

“In order to get into this market, you need to push the envelope a little bit,” says Orca creative director James Ewin. The Bristol-based studio recently designed the visual identity for whisky soda mix Mogul & Dram. The British brand is inspired by a Japanese drink, the Suntory Highball, which mixes sparkling water with whisky. The name, devised by Orca, ties into the founders’ love of skiing (moguls are the bumps on ski slopes) and the whisky niche (dram is a traditional measurement for the alcohol).

The name also speaks to a balance of work and active lifestyle that the studio believes resonates with the drink’s target audience of younger drinkers. Hard seltzers are particular popular among millenials and Gen-Z drinkers, attracted by a healthier alternative and the variety on offer. “They are typically quite burnt out with the hours they work,” Ewin says. “They’re also very conscious about what they’re putting into their bodies.”

Mogul & Dram drinks are infused with flavours like lemon or grapefruit and have fewer than 100 calories. This sense of “responsible enjoyment” was crucial to convey, Ewin explains. The “vibrant and visceral” colour palette and graphics depicting outdoorsy scenes were one way to achieve this. Another was to show “complete transparency around ingredients”, he adds. It was also important not to lean into any clichés of the health sector, such as a blank canvas to represent low-calorie drinks, according to the designer.

Ewin stresses the importance of incorporating heritage into the design. “We wanted it to be a modern interpretation of a whisky brand,” he says. For inspiration, Orca looked at old whisky branding – from bottles to barrels – and drew upon the traditional serif and slab serif typefaces used in that sector. 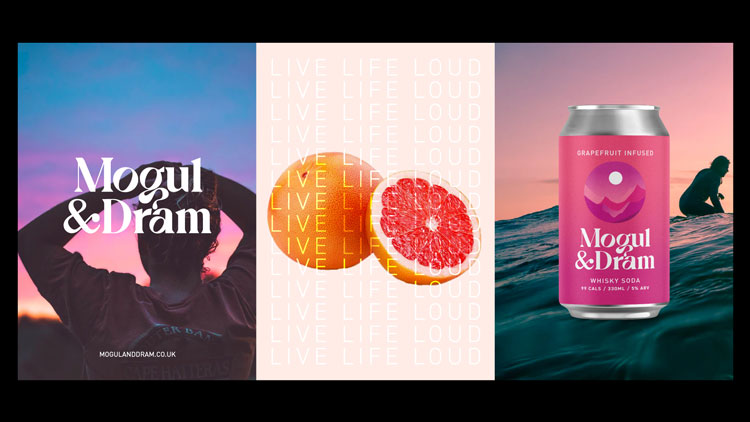 This research phase influenced the custom drawn typeface used for brand’s logomark. The letterforms have been designed to give a sense of fluidity, Ewin explains, pointing to the droplet shape in the g’s tail. “Whisky drinkers are often engrained in whisky culture and the way it’s made and produced,” Ewin adds. “We didn’t want to forget that.”

Another focus for Orca was to move towards a more inclusive audience. “Traditionally people would have associated seltzer to be drunk by women and whisky by men, and we were trying to break those barriers,” Ewin adds. The studio avoided any potentially masculine cues such as blacks, dark browns and ambers, which have been used to represent whisky hues in the past.

Tapping into a more progressive audience 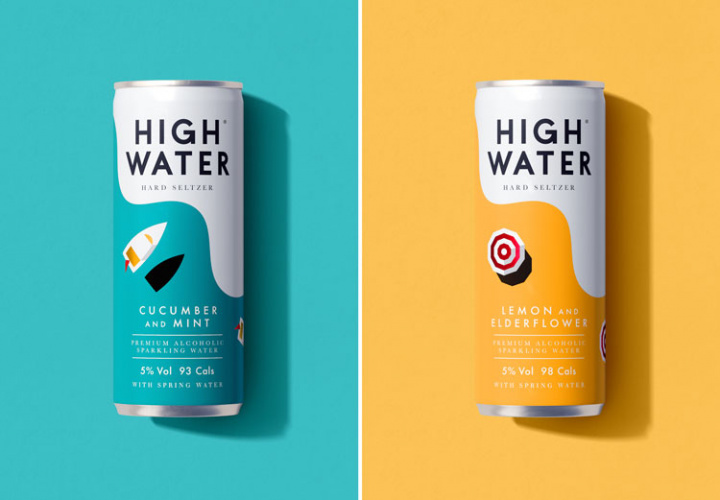 While Mogul & Dram’s identity had to consider whisky-specific clichés, designers are keeping in mind a more youthful audience when it comes to hard seltzer branding more generally. Research shows that attitudes towards gender are shifting in younger generations. “We were aiming it at a more progressive audience,” Midday creative partner Will Gladden says of High Water, a British hard seltzer that combines vodka with flavours like elderflower and cucumber.

Gladden echoes Ewin’s thoughts that millennial and Gen-Z audiences are both more health conscious and care less about simplistic binaries for alcohol. “This category is incorrectly aimed at the female audience,” he adds. “It’s about creating something stylistically not gender specific.” 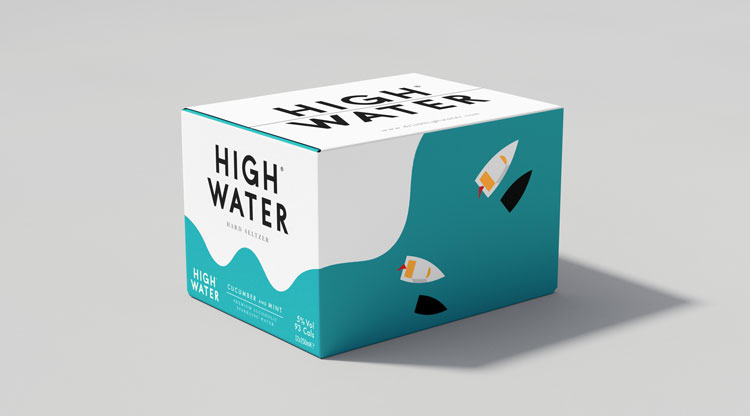 The studio looked to vintage European travel posters and the British coastline for inspiration for the playful branding, according to Gladden. Designs for the three flavours incorporate those visuals, from parasols to speed boats. They also provided the inspiration for the graphic framework of a coastline used throughout the identity. All the visuals are drawn from a bird’s eye view – a “literal high point”, Gladden says – which aims to give it a unifying aesthetic. The shadows on the speed boats hope to convey the idea that they’re floating.

“It transports you,” Gladden says of the branding. “It was about creating a brand that felt aspirational, and had a sense of occasion and place.” An aspirational look was a careful line for the studio to tread for High Water’s identity. “On each one, we try to give you a sense of place and try to transport you to place you may have experienced or want to experience,” he says, adding that the scenes could be Cornwall or the French Riviera. “There’s a European touch to a British look.” 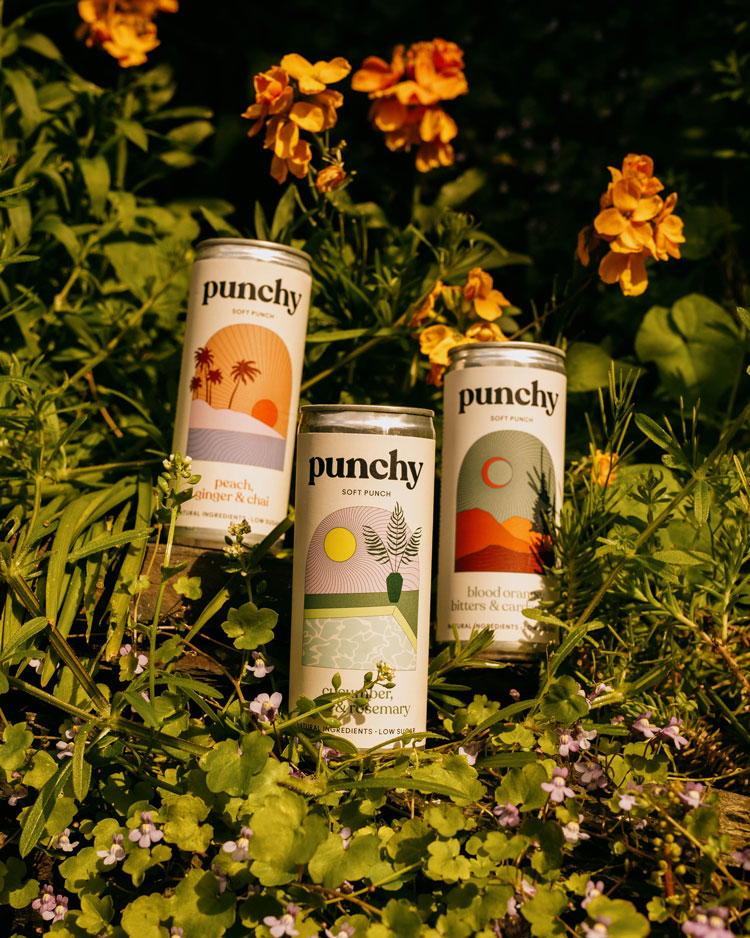 The holiday-inspired look and feel for High Water lends it special appeal over the summer months, which ties into the sector’s refreshing appeal. “The whole category is aimed at having your best time in the summer,” Gladden says. “But there’s no reason why people wouldn’t drink a vodka soda in November. Sometimes when it comes to autumn, you’re still trying to hang onto the summer.”

Sharing a similar holiday aesthetic is Punchy, which has found particular resonance among drinkers amid lockdown according to its brand designers Duzi. The line has three flavours, each with an alcoholic and non-alcoholic version, and is designed to make neither group feel excluded at social gatherings. That’s important for Punchy’s target audience of Gen-Z, a generation that is drinking less than any other. Instead of viewing a dwindling target audience as a challenge, Duzi co-founders Charlotte Carnegie-Brown and Ella Donald saw it as an opportunity to present Punchy as a perfect solution. 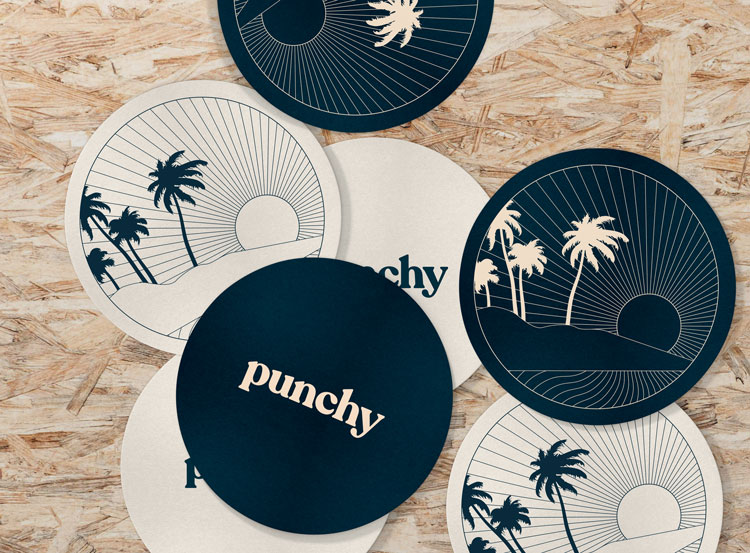 The identity was inspired by the idea of ‘fauxstalgia’, according to the designers. This feeling of identifying strongly with an era you were not part of has infiltrated Gen-Z, explains Donald. The past year has witnessed viral skateboarding TikToks set to Fleetwood Mac’s Dreams and the resurgence of 90s and early 2000s fashion. “The audience Punchy is speaking to has fauxstalgia for days and years they weren’t part of, which is kind of lovely,” Donald adds. “They’re obsessed with 90s trends, 70s films, and associating with a time they weren’t part of.”

The cans’ illustrations, from poolsides to beach sunsets, draw on 1970s poster designs and imagery, the co-founders explain. The studio used Recoleta as the typeface, which is inspired by fonts like Cooper which were popular in the 70s. The three varieties of drinks – First Dip, Golden Hour and Holiday Romance – also set a “care-free” tone and seek to provide a moment of escape, Carnegie-Brown adds. First Dip, for example, hopes to evoke “that first moment you get into a swimming pool on holiday”, she says.

“They’ve made the punch bowl safe” 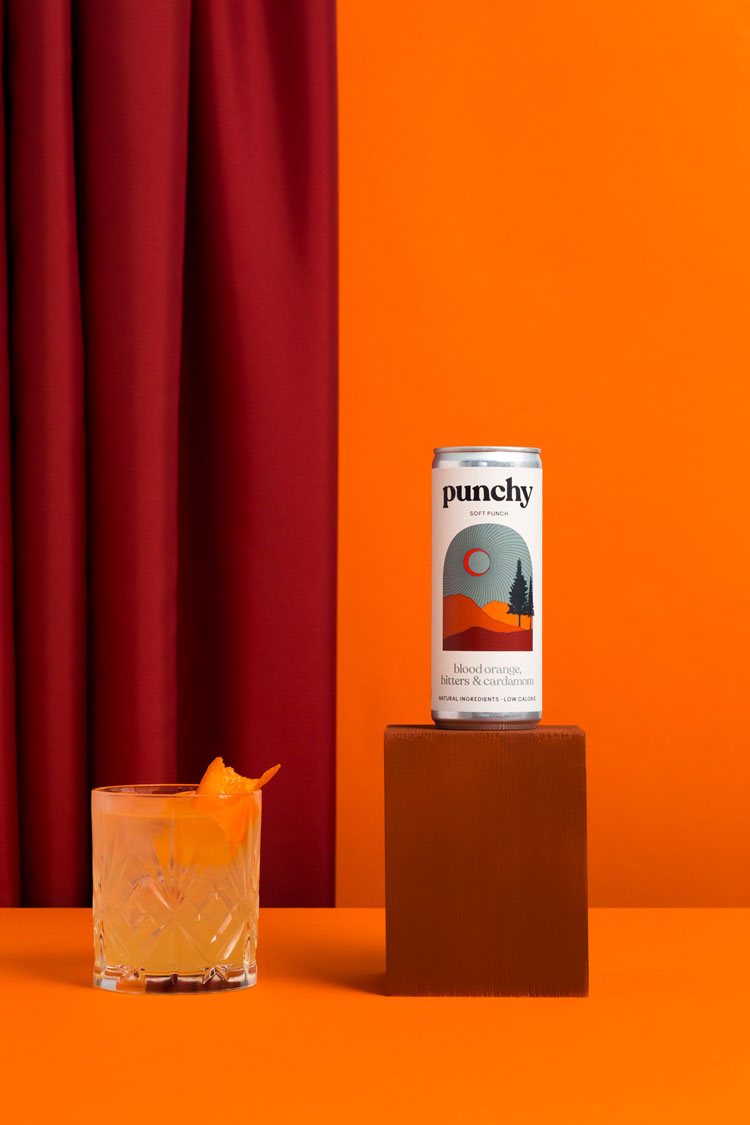 So that none of these touches became outdated too soon, the designers tweaked elements – such as the typeface – to keep the style as contemporary as possible. The zero alcohol and alcoholic versions are differentiated through a navy and cream colour scheme. And once more, the designers were keen to avoid any “soft pastelly covers” that would land them in the overtly feminine territories of RTD gin and tonic brands. Built into all these brands are nods to sustainability, another concern for younger drinkers. Packaging for all three brands is made from sustainable materials, while both Punchy and High Water donate money to sustainable charities.

Punchy takes its name from the traditional punch bowl drink, which has helped with its positioning. “It’s usually made in a quite haphazard way that is inclusive,” Carnegie-Brown says. “That was key to Punchy’s branding – we’ve stayed true to tradition but in a modern way.” The pandemic has likely made punch bowls a thing of the past, which provides yet another opportunity for the RTD product. “Luckily they’ve gone ahead and canned them,” the designer adds. “They’ve made the punch bowl safe.”

Ending planned obsolescence is a “brilliant opportunity” for designers