How COVID-19 will change our daily habits is unknowable. But it seems likely that many of us will be – or already are – thinking about how clean our domestic and work spaces are, and designers have turned their attention to this newly relevant interest.

Tech start up Scribit, which last year launched a write and erase robot with Olafur Eliasson, has converted part of its production line to respond to the current pandemic. Along with Italian architectural studio Carlo Ratti Associati, it has designed the Pura-Case. It is a “portable wardrobe purifier that uses ozone to remove most micro-organisms, bacteria, and viruses from clothes and fabric”. 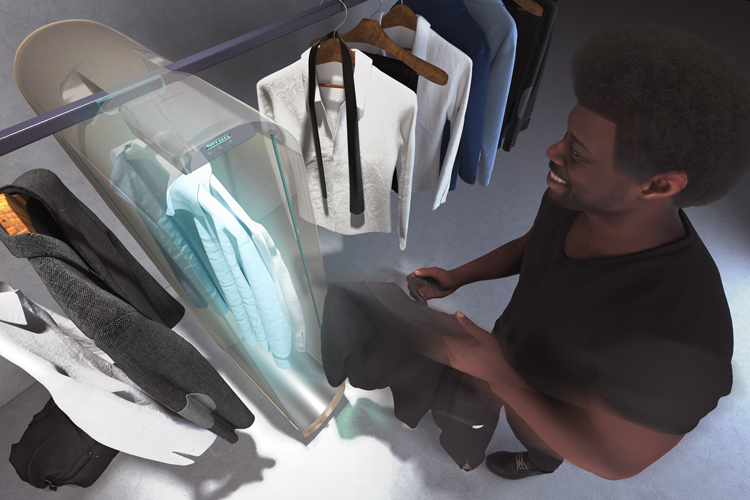 The device is inspired by air purification systems in hospitals and textile factories, and works like a kind of garment bag. Once clothes are hung inside the case, the purification system – controlled by an app – can start. It uses “ozone treatment” to “sterilize” clothes, which is a “naturally-occuring triatomic form of oxygen”. The technology is similar to the ICU pods that the studio designed in response to the need for hospital beds. It is being developed at Scribit’s factory in Turin, Italy.

Bringing the ozone inside 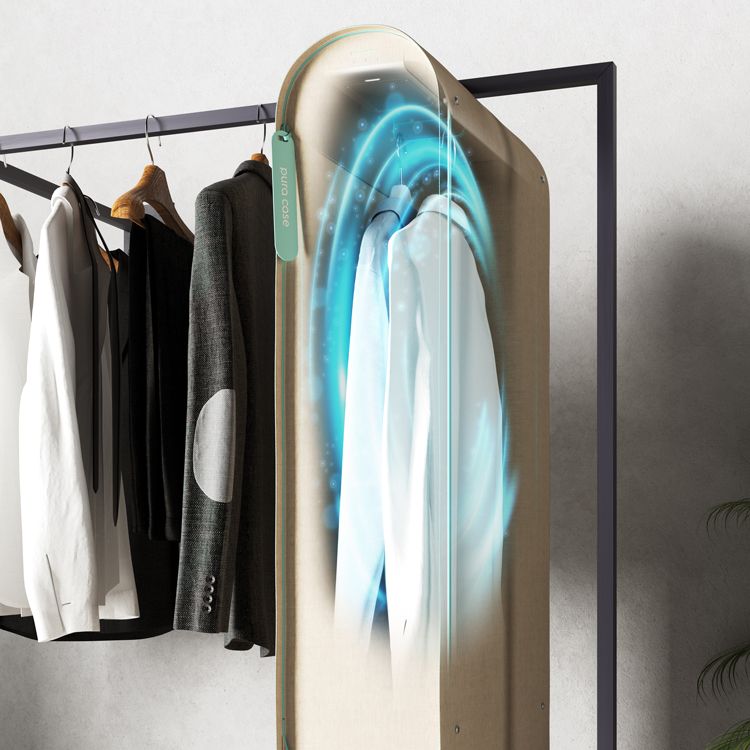 Pura-Case, currently in a prototype stage, can be installed in a domestic setting and a purification cycle takes an hour. It can accommodate up to four hangers at once in an air-tight zipper. “Using only a small amount of power, an imperceptible discharge will activate the ozone to penetrate the fabric and purify it while at the same time removing its odour,” according to the design team.

The air-tight zipper was one of the design priorities, Carlo Ratti (the studio’s founding partner) tells Design Week. It needed to “completely contain the ozone during and after the purification process” and “make sure that the set ozone concentrations are never exceeded inside and outside the case”. While ozone is a naturally-occurring gas – it is what “gives that pungent smell to the air during summer thunderstorms” – people “should not be exposed to it above certain concentrations”. 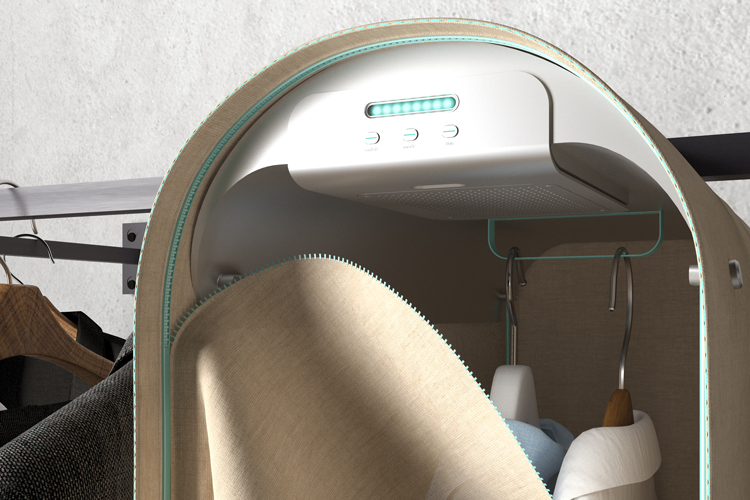 A widespread feature of this product design sector is a focus on energy resources and environmental efficiency. Ratti explains that the product is “digitally-augmented”. It “incorporates various sensors and electronics that control the exact quantity of ozone emission” which allows a user to monitor their clothes. “This enables us to use the lowest amount of ozone necessary to get the clothes purified,” he explains. 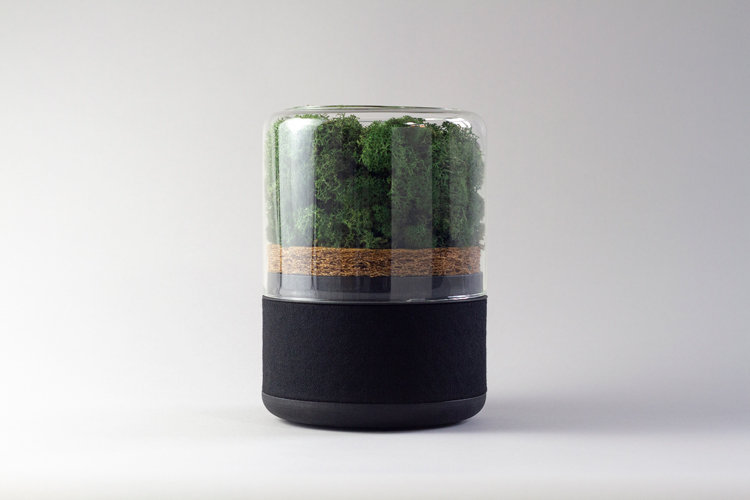 While Pura-Case focuses on garments, the inside atmosphere is another focus for consumers. Sean Sykes is founder of Five Create, the Yorkshire-based studio that designed Briiv, an air purifier. Although the process of designing the purifier started over a year ago, he tells Design Week that the COVID-19 situation has “given front page headlines to this issue”.

When the studio began designing, it was prompted by “rising public awareness of poor indoor air quality” because of high inner city pollution levels. It’s a nice tie-in amid the ongoing crisis: “People are now actively looking to improve the air quality in their homes which will help to improve their respiratory health in return,” he says. 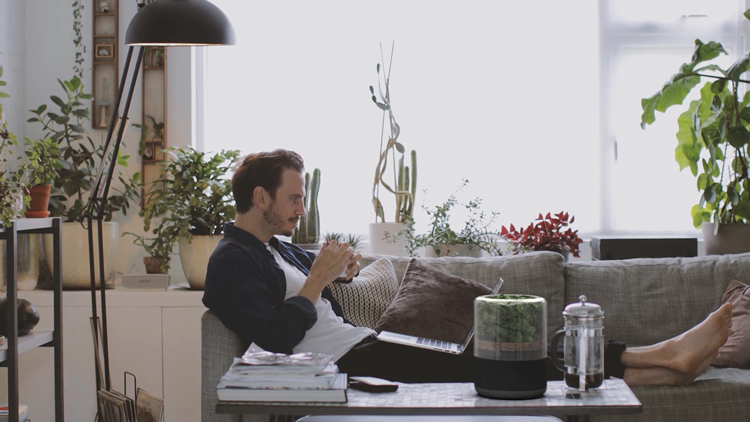 It’s billed as the world’s first plastic free air purifier, though the design considerations are complex. For example, the user interface was a “key priority”, as usually changing filters can be “quite tricky or time consuming”. To change the filter with Briiv, you lift off the top and have “direct access to the main filters”.

Low power consumption, so as not to add to the pollution levels that the product aims to work against, was another priority in the design process. “The last thing we wanted to off our use of sustainable materials with a big electricity bill,” Sykes says. The studio has managed to create a product which has an energy consumption of 0.005kW/h, which they say makes it “one of the most energy efficient purifiers on the market”. According to the studio, it can remove harmful toxins from a 4x4m room in half an hour. It can also be integrated with smart home systems.

House plants without the hassle 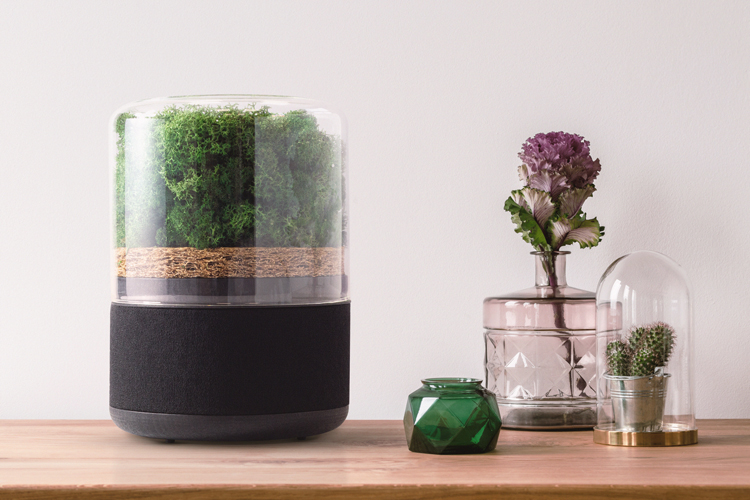 But perhaps the most noticeable thing about Briiv is that it doesn’t look like an air purifier. In the form of a glass case, with moss which “captures large particulate matter like dust and animal dander from the air” and a layer of coconut husk which traps “harmful substances in the air”. Activated charcoal pulls “odour from the air” so that the air is not only cleaner, but it smells better.

The “secret weapon” however, is sheep’s wool. The filter, which was developed by NASA as an air filter for its Orion capsule, is as “effective as a plastic HEPA (high efficiency particulate air) filter” but benefits from being 100% biodegradable. It is, the studio says, “as powerful as 3,043 medium sized houseplants”. For the gardening-averse, this provides “the benefits of having plants in your home without the hassle”. Currently on Kickstarter, Sykes hopes that Briiv can be made available by the end of the year.

What next for purifying products?

The push in product design for at-home devices is clear, and perhaps skewed for a time where many of us are still under lockdown with no clear exit strategy. What could be next for the sector? The intersection of purification and wearable technology seems like an obvious route especially once we venture outside again. So far, most examples do not boast much aesthetic value which will be necessary if these are to be worn by many.

A clue to what it might look like comes from a patent application made by Dyson this year. Bloomberg reported in February about a purification design that takes the form of headphones where the earcups will be attached to a motor that is in turn connected to a propeller, which would be able to draw 1.4 litres of air per second through a filter, effectively purifying the air around our faces.

A Design Week guide to creative kids’ resources in lockdown