Technology company HP is finally rolling out a new identity designed by Moving Brands – more than four years after it first emerged.

According to The Verge, HP is using the mark on its newly released Spectre 13 laptop – and will use it solely on its premium laptops.

The identity – dubbed the “progress marque” was initially unveiled at the end of 2011, as part of a wider brand repositioning project led by Moving Brands.

Moving Brands chief creative officer Mat Heinl said at the time that the mark has the proportions of the original HP logo, can be easily animated or simplified and references a forward slash.

The logo ties with the wider design system developed by Moving Brands, which uses a 13° angle.

Heinl said: “It is the angle of founders Bill Hewlett and Dave Packard’s original logo – which can still be found on the wall of the HP Labs building in Palo Alto, [California].”

At the time of its unveiling though, HP said there were no plans to adopt the logo. The company told Design Week: “The design system created with Moving Brands was the only aspect of this work that was approved.

“The logo was a working draft that did not get adopted by HP.”

Last year HP was split into two companies – Hewlett Packard Enterprise, which deals with corporate hardware and services, and HP Inc, which comprises the company’s computer and printer business. 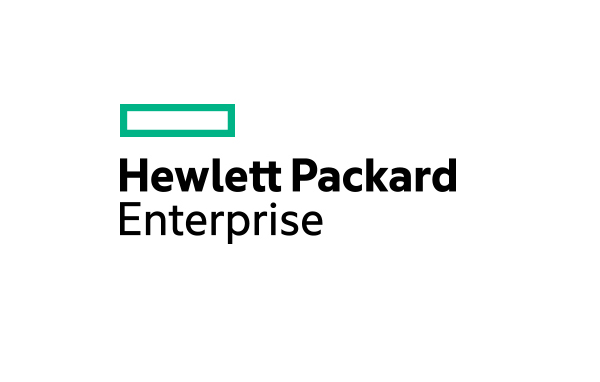 The new Hewlett Packard Enterprise identity was unveiled at the time of the split. The mark uses a green rectangle above a wordmark.

Hewlett Packard Enterprise president and chief executive said of the new mark: “The colour we picked is no accident. I wanted us to stand apart… It’s different, I know.”