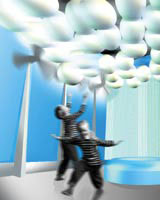 Imagination is finalising the design details of an £800 000 permanent interactive exhibition for Eureka!, the children’s museum, which will open in July.

The consultancy, which is commanding a six-figure fee for the work, will present final designs this week and will then oversee the construction of the exhibition, entitled Our Global Garden.

The 280m2 exhibition, which is aimed at threeto 12-year-olds, is a journey through the cultural, geographical and climatic phenomena of the planet. It will consist of seven ‘gardens’, including local town and country gardens, and jungle, ocean, polar and desert gardens.

Children will be encouraged to move around the spaces by Gordon the Gnome, a computer-animated character created by animation company Collingwood O’Hare Entertainment.

‘Children will use hands-on exhibits to learn how important our environment is and how precious the environment around the world is. There will also be an ideas garden where children are asked their thoughts on the environment. Children can physically interact with the exhibition. So, in the ocean garden they can start a fan that is directed towards a wind generator. The faster they move the fan, the faster the generator moves so they can see how much energy they are generating,’ says Eureka! manager, new exhibit development Tudor Gwynn.

The consultancy, which won the work following a two-way unpaid creative pitch against Event Design, was appointed in early November 2001. It presented initial design concepts in January, while ‘some of the layout and some of the look and feel’ was presented in early February, says Gwynn.

The museum is based in Halifax and has attracted over three million visitors since it opened in 1992. Imagination created the Me and My Body exhibition at Eureka! in 1992.