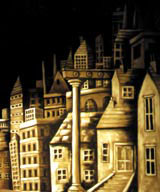 Julian Crouch owes a lot to Copydex. In his mid-teens he was given a gallon of the stuff as part of his prize for winning the Young Observer Collage Competition. It was the start of a creative partnership – a boy and his glue – that endures to this day.

One of the key driving forces behind the Olivier award-winning show Shockheaded Peter, which returns to London’s West End this week, Crouch started out as a mask-maker in the 1980s, even before he had decided to work in the theatre. ‘I had vague notions about becoming a theatre designer, but no idea how to go about it. After university I shut myself away in my bedsit and made dozens of masks with hessian, muslin and Copydex.’

He was also involved with an Edinburgh workshop run by the Scottish Youth Theatre and, through it, came into contact with various fringe theatre companies, including one called Trickster. ‘Luckily for me Trickster ran short of masks for its show, so it employed me as its mask-maker.’

Crouch thought he had died and gone to heaven. Here was a touring theatre company that fulfilled his aesthetic ideal – experimental, more visual than verbal, design and direction fully integrated. On the debit side it was permanently strapped for cash and when the Scottish Council stumped up a bursary for Crouch to join Trickster in London for a year, the trainee found he was the wealthiest member of the crew. Despite his lowly status, Crouch soon became an indispensable member of the team, co-designing a show called Charivari, a picture-book circus full of strange creatures on stilts, special masks and weird costumes. ‘It was meant to be a bit of a stopgap for the company, but it became one of its most popular shows. It was a shock for me when it folded because my work with Trickster had led me to believe that theatre was all about masks and mime.’

In the late 1980s, feeling insecure about his theatrical credentials, Crouch found himself drifting into other areas of performance. He had always played music and liked the idea of doing lots of different things. He played bass guitar with two bands at this time. The Howlers, the more successful of the two, became a big hit on the London alternative comedy circuit. They became the house band at the Hackney Empire. ‘It taught me a lot about respecting audiences. When we played a gig like the Piazza at Covent Garden, people would just wander off if they were bored. You had to find ways of holding their attention by giving it a little bit extra.’

During this time he carried on mask-making and in 1989 made the decision to give up aspiring to be a rock star and return to stage design. He joined the radical left-wing group Welfare State International, which specialised in ‘huge, outdoor spectacles’ – their best known was modestly entitled The Raising of the Titanic – and prided itself on its ability to attract an audience almost anywhere in the world.

‘It was a brilliant, crazy and exhausting time. I met some extraordinary people and I learnt about welding and mechanical engineering. It drove me nuts sometimes. [The group] did its shows in fields and bombsites so you had to camp out in army tents. There were fights and arguments all the time.’ It must have come as some relief to be invited by his friend Julia Bardsley to design a children’s show, The Little Prince, at the Leicester Haymarket in 1992, when he first met the actor and director Phelim McDermott, who was working on another show at the same theatre. They found they all had a lot in common, and McDermott asked Crouch to join him as co-designer of Dr Faustus at the Nottingham Playhouse, with Lee Simpson assisting.

‘It was the first time I’d done a conventional grown-up show,’ recalls Crouch. ‘Phelim and I decided we would design something that wasn’t actually finished until the actors used it. The set consisted mostly of books and a towering library that opened up and swallowed the doctor at the end. It was ambitious. ‘We’re interested in how that transformation of the set works within the context of the show, rather than creating something static that the actors simply inhabit.’

Together Crouch, McDermott and Simpson embarked on various projects, including The Servant of Two Masters for West Yorkshire Playhouse, using cardboard cut-out furniture, The Quest for Don Quixote, which Crouch and McDermott also co-directed, with a design kit made up of baskets and ladders, and an adaptation by them of The Hunchback of Notre-Dame. By 1996 they had formed themselves into Improbable Theatre, with the aim of blurring the demarcation lines between design and direction. In its first show, Animo, Crouch actually worked onstage, building puppets and masks as part of the action.

Its radical production of A Midsummer Night’s Dream for the English Shakespeare Company first toured the UK in 1997, and has recently been re-staged in Hamburg. The set consists almost entirely of picture frames, doorways and baskets. As with all its work, the design unfolds as part of the show, with the frames transforming into trees and insects.

The success of Shockheaded Peter came as a huge surprise to Crouch and McDermott. Never conceived as a commercial show, it was expected to run for about six weeks. It is now in its fifth year. It is based on an obscure 19th century German book called Struwellpeter, written as an antidote to soppy, moralising children’s stories. Each one of Heinrich Hoffman’s tales of misbehaving children culminates in a child’s death, not the most promising start, you might imagine, to a popular musical entertainment. It is played out against a lurid little toy theatre world, full of creepy grown-ups and mischievous children.

‘We wanted it to have to look and feel of a freak show,’ says Crouch, who devised, directed and designed it with McDermott and Graeme Gilmour, ‘so we had a lot of false perspective and a kind of makeshift theatrical look. The original illustrations from the book were useful for motifs and costumes, but not the basic design. I looked at a lot of early fairground architecture and barrel organs. We wanted lots of doors and trapdoors so that the musicians could move around and suddenly appear where you’d least expect them. We always knew we wanted it to be tongue in cheek.’

Even though it’s now an international hit, with 12 separate productions in Germany alone, none of those involved with Shockheaded Peter want it to become a soulless cash cow. ‘We’ve become like an extended family or a premiership football team,’ says Crouch. ‘The plan is to have enough substitutes and interesting combinations to keep it alive. I’m still very proud of it, but I’d hate to think of it stagnating.’

Meanwhile, Improbable continues to plough its very particular and idiosyncratic furrow with shows like Sticky – a non-verbal outdoor spectacular that involves a 30m-high crane, several hexagonal frames, some serious fireworks and hundreds of rolls of Sellotape. What starts out as the biggest spider’s web you’ve ever seen turns into a beautiful 30m-high tower which ultimately implodes. I thought Shockheaded Peter was weird, but clearly the boys from Improbable have only just started. m

Shockheaded Peter is at the Albery Theatre, St Martin’s Lane, London WC2 until 15 June. Sticky has five UK dates between May and September, before it travels to Australia