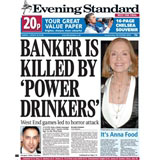 The Evening Standard launched its latest redesign on Monday, created by Michael Crozier and his London design consultancy Design Unlimited. The brief, Crozier says, was to inject colour into the pages, while keeping the feel the same.

Certain elements, such as the TV page, have been restyled and more white space has been injected throughout, he explains. Crozier is the former design director of The Independent, which he also redesigned in June 1998.

Gadget Shop plans to relaunch on the high street