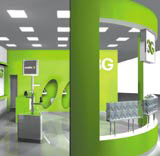 3G Mobile, which took over the old Eircom stores in May, is seeking to broaden the remit of a traditional phone retailer. As well as phones, the new stores will offer Sky Digital subscriptions, video games and ‘Internet zones’.

The Chance & Fat-designed retail concept will be trialled at the company’s two flagship stores in Dublin before a roll-out across the retailer’s 17-store estate.

Butt claims the greater challenge was to get people to sign up for additional services. All of the group’s concepts feature live phones, allowing customers to ‘picture text message from one side of the store to the other, and play games over wireless Internet’.

Chance & Fat will also introduce some ‘theatre and scene-setting’.

Image Now managing director Darrell Kavanagh says the group chose an ‘olivey lime green’ for the identity both because it ‘reflects the stores link to Ireland’ and ‘is modern and retail friendly’. The group tried to keep the logo ‘simple and sharp-edged’, he adds.