La Boca, an illustration-focused studio based in Amsterdam and London, has designed a new four-volume book collection that celebrates the short stories of Philip K. Dick.

The collection is the result of a partnership between the late author’s estate and illustrated book publisher The Folio Society and features all 118 of his short stories. The project has been art directed by Raquel Leis Allion and Sheri Gee.

La Boca has previously worked with the publisher. Publishing director Tom Walker says the studio has a “leftfield approach” which is “conceptual, experimental and graphic”. La Boca says its team is “not averse to a little strangeness and abstraction”, making it a good fit for designing the collection for the famed science-fiction writer. 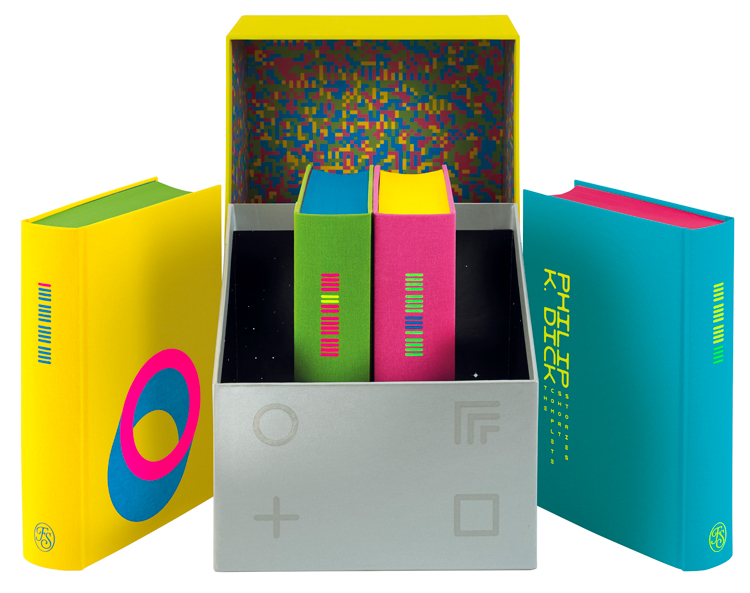 Born in Chicago in 1928, Dick began his affinity with the science-fiction genre in childhood. An introductory essay by American writer Jonathan Lethem celebrates the author’s “deeply paranoid and oddly joyful” stories, which are all “lovingly constructed” with the building blocks of the sci-fi genre.

These worlds are the primary inspiration for the design of the collection, according to The Folio Society. The four-volume collection is bound in four equally bright colours: yellow, green, pink and blue.

Each book features a selection of abstract graphics which indicate the order they should be read in. The first book shows a circle – drawn, obviously, with a single line; the second features a plus sign or cross drawn with two lines, and so on. this is one of a “dizzying array” of special features in the design of the collection, according to the publishers.

“For the book design, we felt Philip K. Dick demanded a totally fresh approach, as one of the great counter-culture figures of the twentieth century,” says Walker.

“Co-ordinated in a fabulous fluorescent rainbow”

As well as the covers of the books, La Boca has also designed the two-part box the collection comes in. The interior of this box is yet another nod to Dick’s genre of choice.

The upper portion of the box is lined with a specially designed paper featuring a multi-coloured glitch pattern, which the publisher explains has been generated from the words Folio S and La Boca.

Meanwhile the bottom portion is lined with a paper depicting a starry night sky. The team say this is a reference to the author’s “fascination with space travel and technology”.

“Every aspect of this production has been designed with care and a consideration towards the ground-breaking nature of Dick’s work,” The Folio Society says. “The bindings, endpapers, title pages, page edges – even the ribbon markers – are colour co-ordinated in a fabulous fluorescent rainbow.”

“A step into a new world”

The variety of illustrators within the book is to reflect the variety of Dick’s writing, according to Walker.

“Philip K. Dick’s writing is extraordinarily varied, from pulp sci-fi to psychological paranoia to a folksy kind of Americana and to get anywhere near that range we commissioned 24 different illustrators from around the world,” says Walker. “We intentionally approached artists working both inside and outside of the SFF genre, and the stylistic range is huge: from oils to digital, abstract to figurative – and the resulting artwork brings new life to these amazing stories.”

We Can Remember It for You Wholesale, the short story that inspired the 1990 film Total Recall, for example has been illustrated by Katherine Lam. Lam’s work features a minimalist design with a limited colour palette everywhere, however the name of the infamous Rekal Incorporation appears in bright rainbow letters.

Meanwhile The Minority Report, the story from which the 2002 Tom Cruise film came, has been illustrated by Dave McKean. It depicts the three human mutants that predict all future crime.

Six illustrations can be found in each volume, with each offering a different style, medium and approach, according to the publisher. The Folio Society says “each artwork is a step into a new world,” and that the experience as a whole is a “visual feast”.

The Complete Short Stories collection is a limited edition box set with 750 copies available, with an introduction by Jonathan Lethem and illustrations from 24 artists. It can be purchased from The Folio Society website.