Webb & Webb collaborated with six artists and illustrators for the collection, with each stamp featuring a scene from a book that marked a “key evolutionary moment” for the genre, according to Royal Mail.

“A really vast and complete mix of approaches”

According to Webb & Webb designer James Webb, the standout feature of the collection is its diversity. The six illustrators and artists commissioned for the project have each approached their stamp with a different style and in many cases different mediums.

Illustrator Mick Brownfield created the artwork for the Day of the Triffids stamp, which features a pencil drawing that has been airbrushed by hand for example. Meanwhile Sabina Šinko’s depiction of Mary Shelley’s Frankenstein has been captured in watercolours. Other stamps use digital artwork, collage and photography.

“There’s a vast and complete mix of approaches here, and we think that’s really necessary given how different each book is,” says Webb.

“Condensing it down to one iconic scene was a challenge”

The starting point for each stamp was reading the book, Webb continues. Some books were easier to summarise and depict in stamp form than others.

“For something like Day of the Triffids, we knew the story was pretty straightforward – it’s set in London, alien meteorites come down to Earth and turn everyone blind,” he says. “But for a book like Shikasta by Doris Lessing, condensing that down to one iconic scene was more of a challenge.”

Shikasta – a story about an alien body that visits Earth and then has to report back to its leaders – was a challenge on several fronts for the team, Webb says. Not only is its plot “highly conceptual”, it also contains a number of subplots.

Additionally, its full title (as it appears on the cover of the 1979 first edition) is Canopus in Argos: Archives, Re: Colonised Planet 5 Shikasta, Personal, Psychological, Historical Documents Relating to Visit by Johor, Emissary (Grade 9) 87th of the Period of the Last Days. This is far too long to put on a stamp, Webb says. The team opted for the shortened name to fix this problem.

“People would have been too afraid to lick the stamp”

To ensure the books were accurately represented, Webb explains that each illustrator and artist was given a quote from the book to inform their work. Some quotes were three or four lines long, while other’s only a few words.

Webb recalls the line given to illustrator Matt Murphy, who depicted Arthur C. Clarke’s Childhood’s End was: “‘Now I understand,’ said the last man”. The line refers to the character left on Earth when no other humans remain – the “last man” is speaking to a celestial object in the sky. “I just think Matt was able to completely capture those few words in his piece for the stamp,” he says.

The use of quotes was also helpful in creatively directing the look of Mary Shelley’s monster from Frankenstein, Webb adds. “We’ve tried to depict monsters in the past and the problem is that monsters by nature are usually designed to be scary and we can’t really have that on a stamp,” he says. “There were other versions of the monster we looked at, but they were just too scary – people would have been too afraid to lick the stamp.”

Instead of trying to make the monster scary the team and painter Šinko referred to a quote from the novel, in which the beast refers to himself as “miserable beyond all living things”. This resulted in a monster that is sad, anguished and lonely, rather than something more terrifying.

Along with using the quotes as direction, Webb says the team approached the project as if they were designing “tiny movie posters”.

“For some of these books, you simply couldn’t consider trying to tell the whole story on such a tiny canvas,” he says. “Instead, we went for trying to convey a main theme, moment or feeling present in each book, the same as you’d get for a film poster.”

Alongside Webb & Webb, design studio Common Curiosity was engaged to design the collection’s presentation pack and first day cover. These elements continue the sci-fi theme of the stamps with futuristic illustrations from Sam Chivers and copy writing from Roger Luckhurst, which charts the history of the books and their authors. 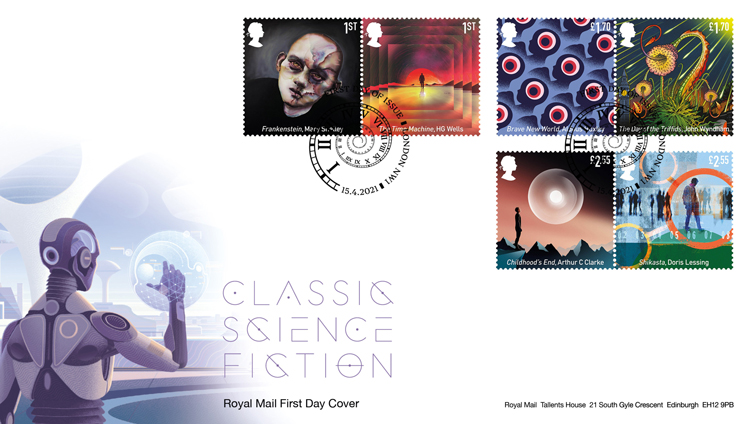 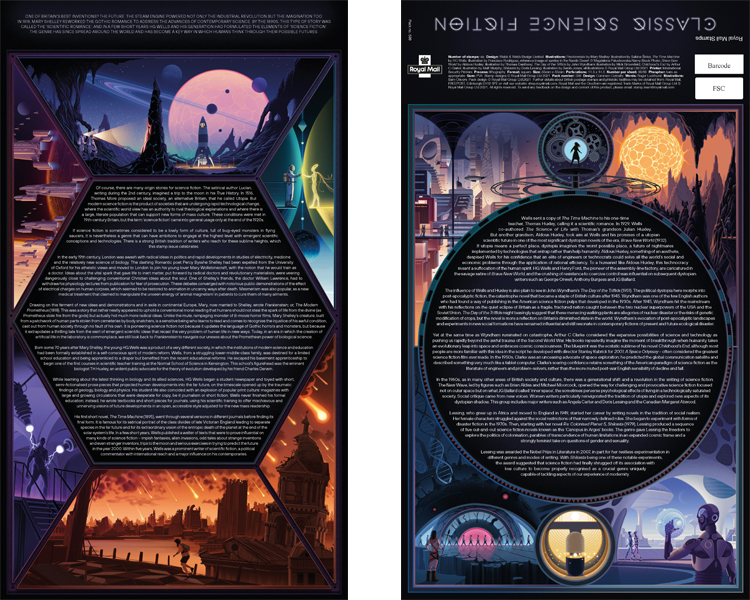 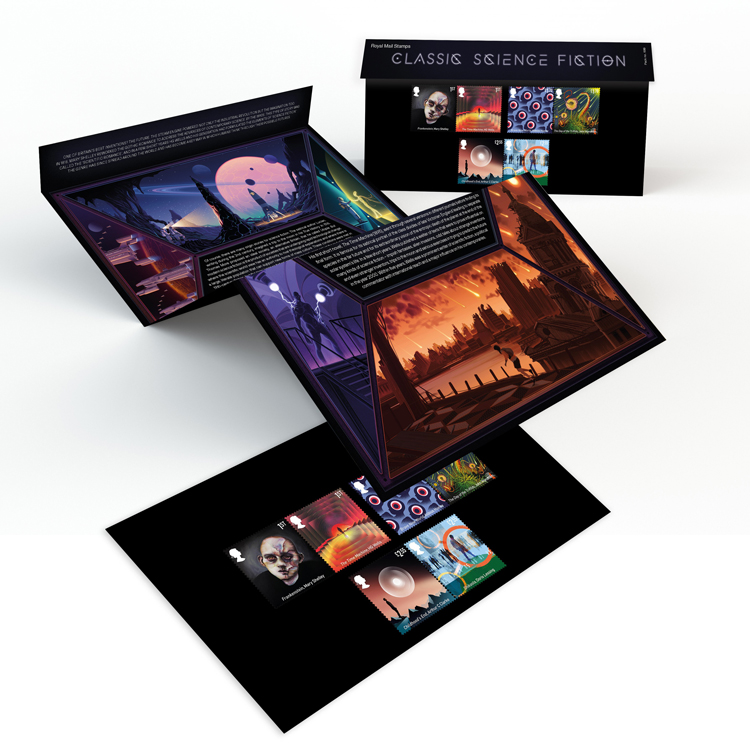 What do you think of the sci-fi stamp collection? Let us know in the comments below…