Fashion brand Scotch & Soda has revealed a new visual identity alongside a retail concept, which rolls out across more than 20 retail spaces around the world.

The lifestyle and fashion brand was established in Amsterdam in 1985, and now has 200 stores across Europe, North America and Asia.

“The identity reflects Scotch & Soda’s design ethos of connecting the expected with the unexpected, celebrating the power of self-expression and liberal thinking of Amsterdam,” according to the brand.

The new identity, which includes an updated logo, colour palette and animations, has been designed by New York-based A Studio.

He explains that the initial brief was to replace the sewing machine marque with a different icon, but that the team instead chose to lose this icon altogether, redesign the wordmark and elevate the ampersand icon.

“By focusing on the symbolic meaning of unity represented by the ‘&’, the brand is now able to connect its purpose more simply and effectively back to its brand identity,” Simonds adds.

The marque is bespoke and contains a few meanings, according to Simonds. It “subtly communicates” the brand’s initials and the concept of a needle and thread and “more explicitly the concept of unity”, the designer explains.

Multiple versions have been created to work at different executions, he adds, including three dimensional applications and animated assets. These have been designed in collaboration with animator Anthony Velen.

More assets have been created for the roll out, Simonds says, including a series of face filters for Instagram and AR animations of the identity. Scotch & Soda is set to release sustainable packaging featuring the new identity as well, according to the designer.

The identity rolls out across the brand’s social media channels, redesigned website and app as well as in several new stores.

One of the most significant of these store openings is in the Dutch city of Den Bosch, where a movie theatre has been repurposed into a store of over 500 square metres.

The former theatre was built in 1919 in the Amsterdamse School style and was conceived by architect A.J. Hekker. It was turned into a cinema after World War II and became known as the Luxor Theatre. 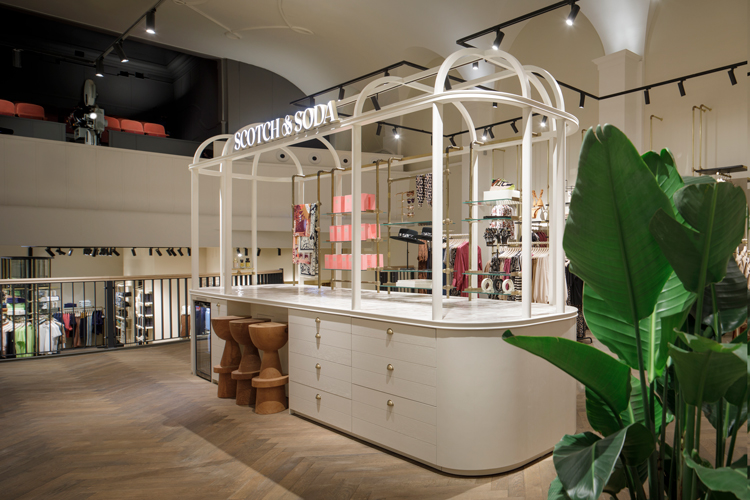 The repurposed building will be the largest of Scotch & Soda’s retail spaces and follows a ‘Free Spirit’ store concept. This is inspired by Amsterdam as the “birthplace of liberal thinking,” says Scotch & Soda CMO Stéphane Jaspar.

“It embraces an optimism that is translated into a light and premium interior with a touch of subtle extravagance,” he adds.

Combined with a new focus on personalised customer experience, this aims to combine the location’s heritage with modern details, according to Jaspar. 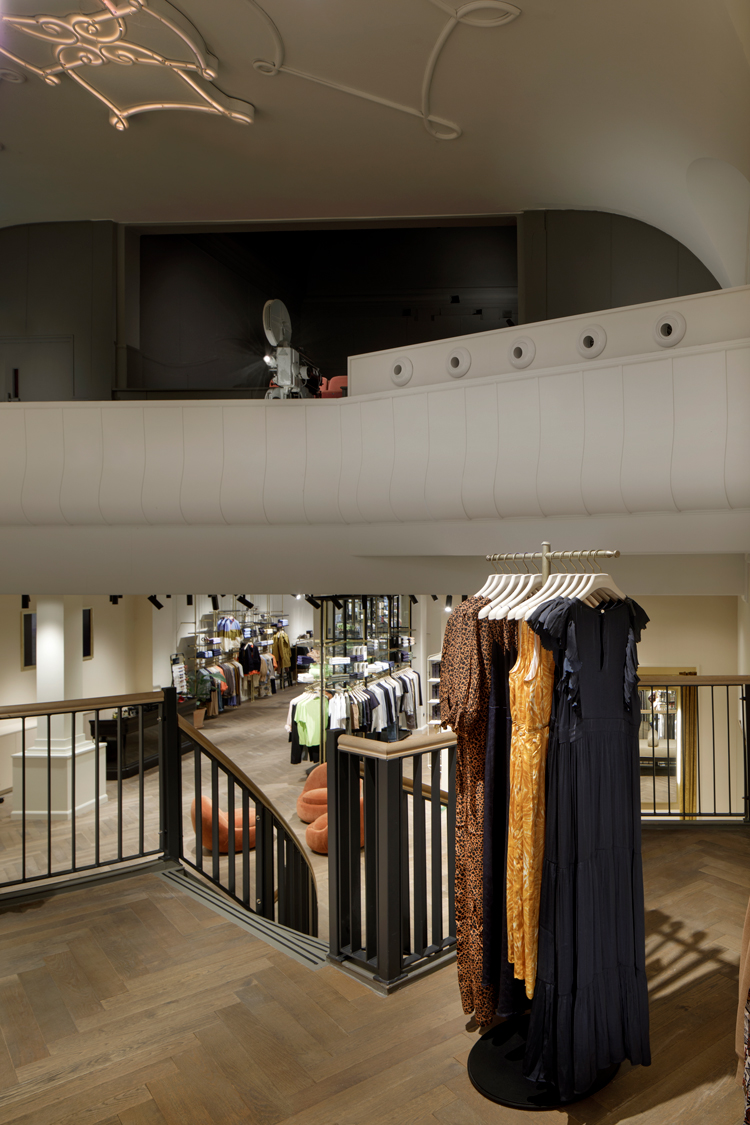 “We have preserved some architectural and design features that were previously present, such as ceiling mouldings,” he adds. The new store also has references to the location’s history, such as an old-fashioned film projector.

The new location puts an emphasis on socialising as well as simply providing a retail offering, with a bar that serves complimentary soft drinks. There is also a dedicated family changing room with an interactive art wall and a series of laughing mirrors for children.

This new concept aims to encourage a communal experience, according to Jaspar. He adds that it can be “translated into different markets and cultures” which will be important for international spaces.

A focus on sustainability 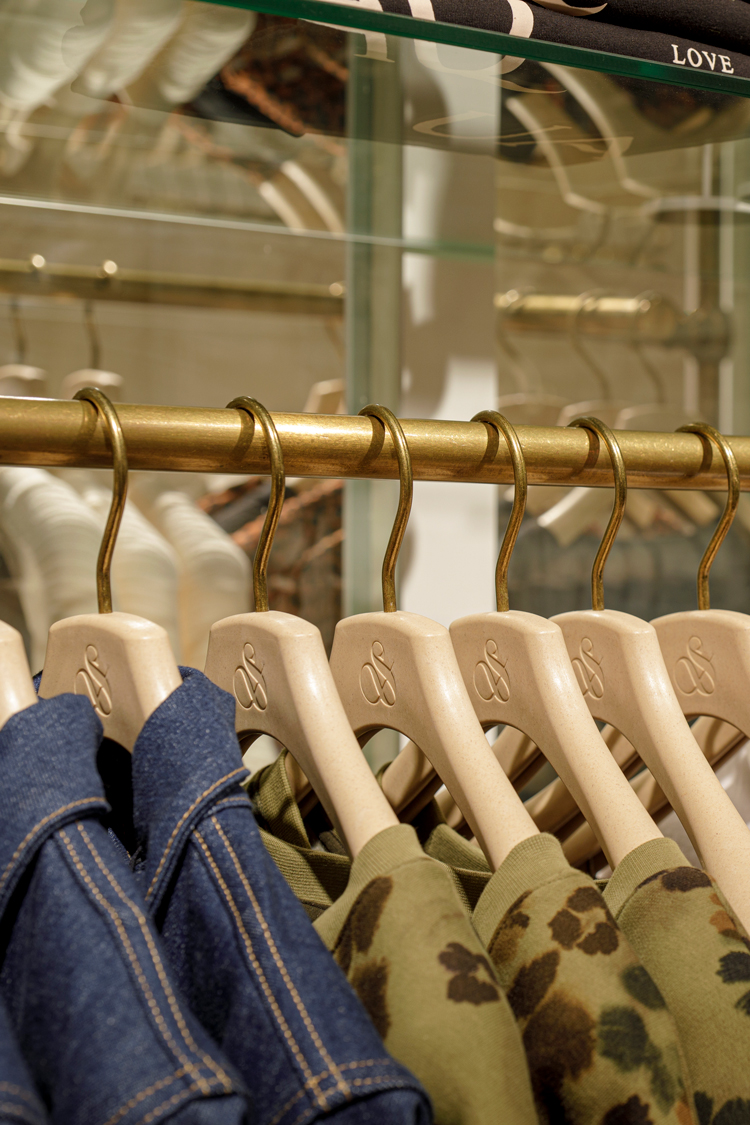 Scotch & Soda plans to open 12 new shops and 12 concessions before the end of October, across areas including the USA, France and Australia. While the stores will “celebrate the uniqueness of each location”, there will be some unified details across spaces, according to Jaspar.

The identity’s updated colour palette will roll out across the stores, for example, which includes muted tones of tan and charcoal as well as accent tones of sunshine yellow, rose pink and burgundy.

These will be matched with fixtures in aged brass, textured tiles, marble and powder-coated steel. 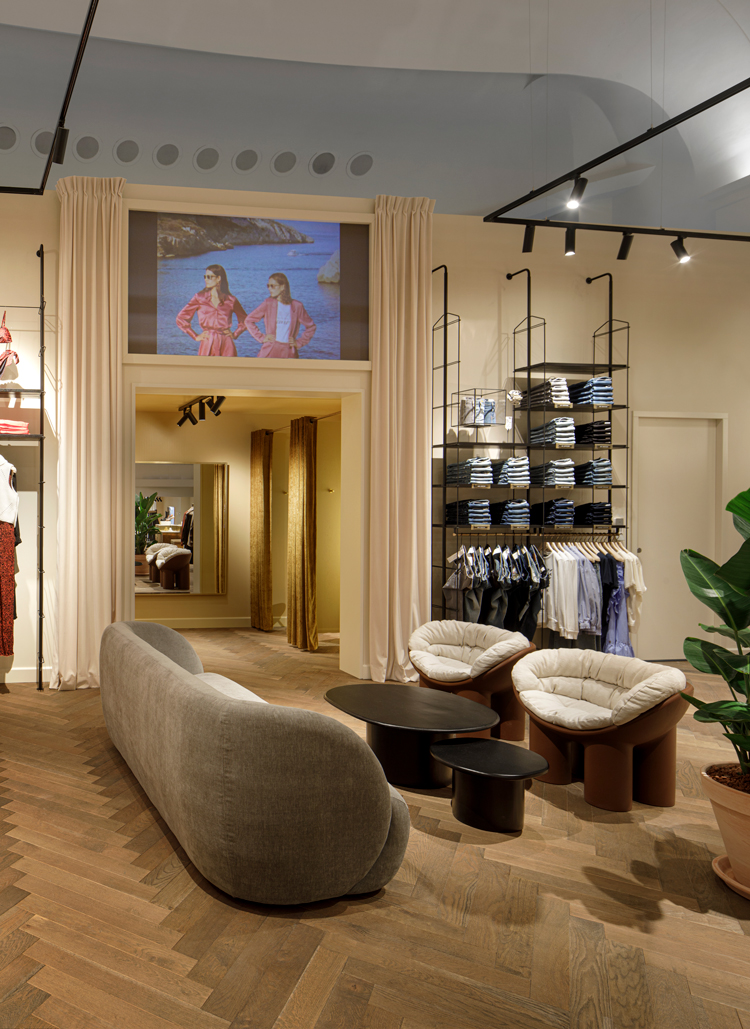 Sustainability is also a focus. New hangers will be made from recycled materials and feature the redesigned brand icon, for instance. Stores will also feature soft furnishings like rugs woven from Econyl, a regenerated nylon material commonly used in fashion.

All new stores will be fitted with LED lights, Jaspar adds, including the exterior brand signage. He says that the brand works with local companies to build stores to “avoid unnecessary travelling”.

Traditional photo frames have also been replaced with more digital screens which is an attempt to “create a kinetic and inspiring feel”, Jaspar says.