While Los Angeles was planning the reopening of its museums and theme parks, Shepard Fairey was working on a new logo for the Californian city. A collaboration between Fairey’s Studio Number One and House Industries, the sun-soaked design for the Los Angeles Tourism & Convention Board is part of the city’s post-COVID comeback, hoping to inspire residents and tourists alike.

“When you say ‘Los Angeles’ it doesn’t necessarily mean just a city,” Fairey says of the new work. “It’s a whole mindset, a vibe, a culture.” That mindset may have been missing for many residents – and undoubtedly tourists – for the past year. In total, Los Angeles County has recorded 1.25 million cases of coronavirus and around 24,000 deaths. Throughout the year, many of the things that make Los Angeles famous have been quiet. 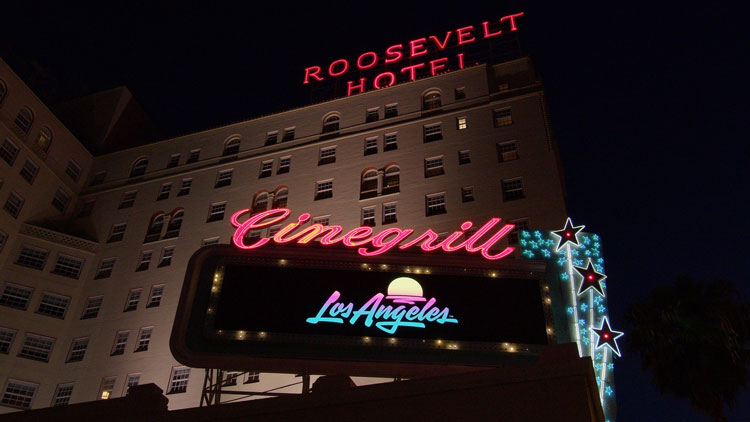 The timely redesign seeks to capture a sense of resilience. “We all dug deep into L.A. culture and came up with a great answer that we feel embraces the spirit and optimism of L.A.”, Fairey says. House Industries founder Andy Cruz explains that the new logo not only speaks to the city’s present but also its past, inspired by the city’s signage and typography. “Distilling that potion of influence into a mark that honours the past but feels new is something all the artists took personally,” he adds.

The logo draws on some of the city’s most famous buildings such as the Hollywood Bowl and the Griffith Observatory, echoed in the dome-shape of the sun. Its colours – described as a “sunburst yellow” and “ocean-inspired teal” – aim to represent the city’s diversity and the journey of sunrise to sunset, according to the design team. The brushstroke under the sun is an abstract representation of the ocean which, together with the “timeless” typeface”, hopes to capture a “welcoming” spirit after a “lost year”, the studios add.

“A chance to re-expand our horizons” 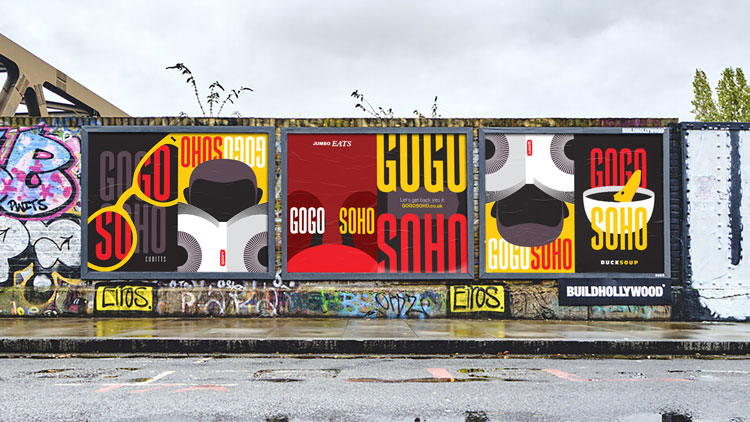 Los Angeles is not alone. In London, a design team from M&C Saatchi turned its attention to the central neighbourhood of Soho (where the consultancy’s office is based). The GogoSoho campaign aims to reenergise the area, whose network of eateries, shops and cultural venues have suffered from the lack of footfall in capital’s central location over lockdown. The poster campaigns features over 20 of the area’s locations (with more to come) as well as a series of six hand-painting ‘Open’ signs which align with the campaign identity.

M&C Saatchi head of design Andy Harris illustrated the posters, working from memory during the February lockdown and more recently at the venues themselves during the phased reopening. One of the latter posters was for Algerian Coffee Stores, which opened its doors on Little Compton Street in 1887. Visiting the store was essential to the creative process. “You walk in and the aromas and uniqueness hits you, and you start thinking about designing,” Harris adds.

The identity uses a typeface from M&C Saatchi’s previous Soho-inspired collaboration with foundry FontSmith. FS Marlborough was based on street signs in the area, and set the tone for the visual language. Working with a strict colour palette of reds (a nod to Soho’s red light district) and urban greys, the posters all contains quirks which relate to the locations.

“We intentionally kept them as minimal as possible,” Harris says, as a way to pique people’s interest. “We wanted to create a talking point and something to interact with – whether that’s a little bit of a picture you didn’t see, or something that you’re not sure about but you want to go and find out more.” 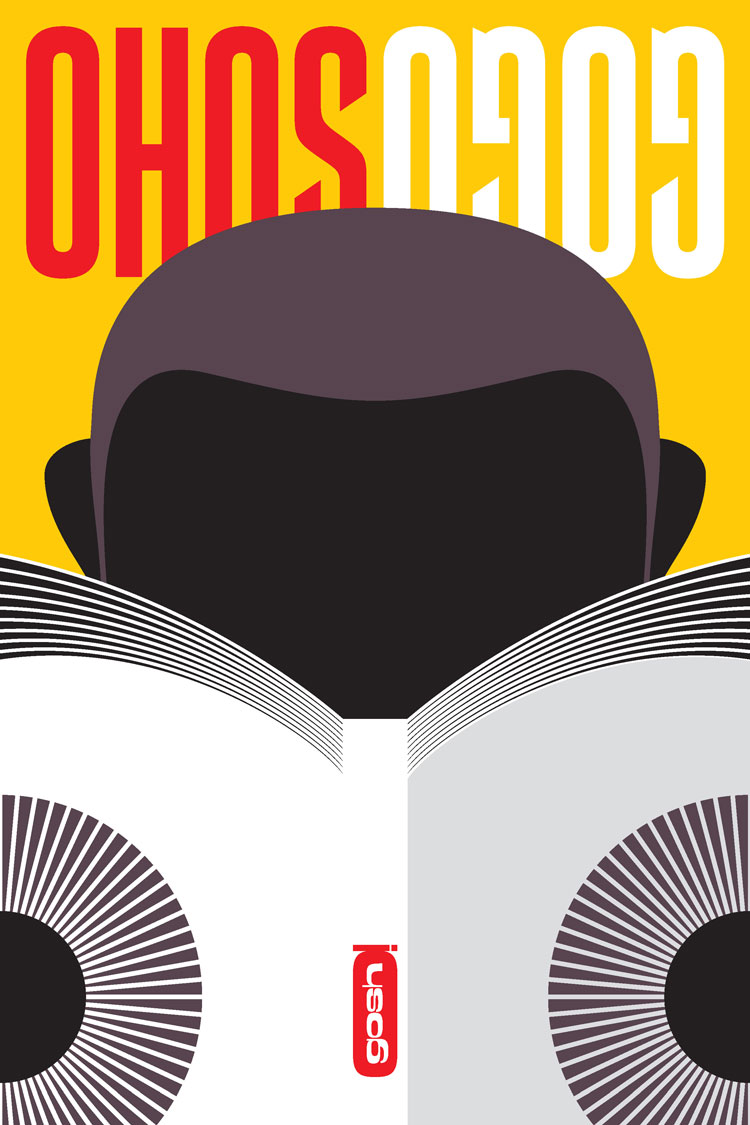 As a result, the designs often resemble vintage film posters or mystery novels. The poster for The Great Frog – a 1970s jewellery shop that specialises in skull rings – depicts a frog with eyes made of rings, for instance. “The intrigue and the quirks in those designs are there because Soho is just different,” M&C Saatchi chief creative officer Ben Golik says. “It’s a little bit off-centre.”

That the campaign is poster-based is key, according to Golik.“The streets are where you have that emotional connection to people,” he says. They have been displayed on the edges of Soho as a way to entice people back into the area. “We’ve all been living narrow lives, and there’s a chance to re-expand our horizons,” Golik adds. “It’s a campaign for London, but also Londoners.” Harris agrees: “It felt really key to have those something on the streets, if we’re encouraging back into the streets.” 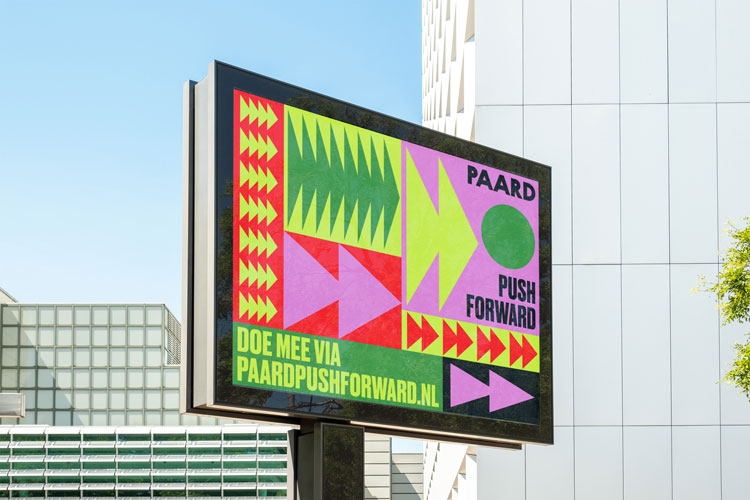 As GogoSoho indicates, culture is the crucial element in building excitement for areas post-COVID. In The Hague, a similar campaign has launched in collaboration with cultural venue Paard to promote popular culture in the local area with funding for artists. The goal of Paard Push Forward is simple – “to support as many cool ideas as possible”, says Menno de Bruijn, co-founder of Studio Lennarts & De Bruijn, which designed the campaign identity.

Menno explains, the idea of kickstarting the city’s cultural scene is brought out in the identity’s triangle signs which represent play and fast forward buttons. The studio has created a series of posters featuring the triangle motif in bright pinks, reds, greens and yellow. “Everyone wants to start again, open again, party again,” de Bruijn says. “So it’s inevitable to translate this into an energetic, joyful, colourful and dynamic campaign.”

The studio has also designed motion work for the campaign, which seeks to take the idea of ‘pushing forward’ even more, de Bruijn explains. The digital platform was also a way of reaching as many people as possible, which was key given the tight planning restrictions.

“We had to come up with something that is easy to apply and can translate into different deliverables,” the designer explains. “It should speak to the creative world and artists in particular, but at the same time it should be appealing for the generic target group, since Paard is for everyone.”

As well as reminding people of places’ charm, designers have taken the past year as an opportunity to rethink areas completely. Staffordshire-based studio Verso collaborated with the town council to aid the recovery of the borough’s three high streets: Eccleshall, Stafford, and Stone. The team linked the three areas in a triangle framework, something that hadn’t been done before according to Verso creative partner Gary Botten. “You’re staring at the map, putting big dots on the areas, and it was just clear as day, this triangular connection,” he says. Luckily, it also formed a “very well proportioned triangle”.

The triangle framework was accompanied by a strategic overhaul for the locations, Botten explains. Instead of competing with one another, the network allowed the areas to play on their individual strengths as a way to support the entire borough. “You can come to Eccleshall for food and drink, but eight miles down the road is Stafford with a wider retail experience,” he says. The “triangular upsell” means that the venues are no longer fighting for the same territory.

Using the #OurBeautifulBorough hashtag and open-source assets, retailers are able to participate in the project. This has shifted perceptions of the area, Botten explains. “It imagined the Stafford borough itself as a shopping centre,” the designer says, which tied in with people avoiding actual indoor shopping centres.

Ultimately, the branding had to take a long-term view, he explains, taking into account not only changing government restrictions but also contrasting public opinion. Given differing views on masks and vaccines, it’s unlikely that everyone will rush back at the exact same time. The studio approached the branding with this in mind, placing an emphasis on both reassurance and solidarity. A tagline of ‘All for one’ is taken from letters in the three high streets’ names, for example. “People are there and they want to come back, they’re just going to do it in their own time,” Botten says. “It’s a much bigger picture.”