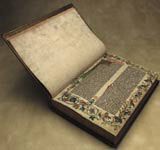 Three of the world’s oldest printed works – the 1454 Gutenberg Bible, William Caxton’s editions of The Canterbury Tales and early versions of Shakespeare’s Quartos – are to be made available on-line later this year, through an Oyster project with the British Library.

The group is creating a series of microsites that will act as gateways to digital editions of some of the library’s most important manuscripts. The Gutenburg Bible (pictured) is believed to be the first book printed in the West with moveable type, while Caxton’s imprints date from 1476 to 1483.

Oyster client partner Anil Pillai says, ‘We want to make this useful and accessible to everyone from scholars to school groups. The Flash-based images can be peeled away to reveal information about the cultural significance, illustrations and printing techniques used.’

D&AD Awards’ record of 53 Silvers – but no Gold