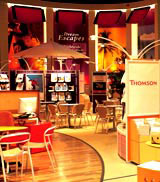 With so many different ways to book a holiday, consistent and effective branding is more important for travel companies than ever before. It is no longer just a question of coming up with graphics and interiors that will work well in a high street retail environment. As traditional travel agents grapple with new ways of doing business, their corporate design must seamlessly embrace not only the Internet, but also emerging digital technologies such as interactive TV and Wap.

It is a tall order for a sector that has been slow to respond to the challenge of new, Internet-based travel retailers such as Lastminute.com. While many travel agents have had information-only Internet sites for some time, even major player Thomas Cook only became fully-bookable on-line this year, and is currently working with Razorfish on a redesign of its site.

Going Places has 730 travel shops but as yet no on-line booking facilities (although it is possible to book through digital TV), while Travel Choice has just commissioned Design House to redesign its site with a view to launching a fully-bookable offer by the end of the year.

Meanwhile, Checkland Kindleysides is working on a redesign of Lunn Poly’s website which will reflect its new retail branding. Having dipped their toes in the water, it looks like travel agents are finally getting serious about the Internet.

“I don’t think anyone is really doing it well at the moment,” says Lunn Poly director of new media Paul Kendrick. “In industry, more and more people are starting to think there needs to be integration across the media, and for travel agents the year 2000 is the year they’ve all picked up on it,” he adds.

Such a multimedia approach is the only way forward for travel retailers, according to Razorfish strategist Max Kelly, since their essentially information-for-money service makes them vulnerable to Internet competitors.

“The Internet is a big threat because it is incredibly good at providing up-to-the-minute information. At the moment it’s just not good at doing it in an easy format,” says Kelly. “No one has quite worked out how to present the information. In two years it’ll be a much, much better experience.”

James Hudson, new media projects director at Design House, adds that when many travel agents have ventured on to the Internet they have become distracted from the key objective of getting people to buy holidays by over-complicating their sites.

“I think many of them have missed the point. It [the site] should be fast and simple to navigate and it shouldn’t confuse the user with stupid, spinning logos and links off to here, there and everywhere,” says Hudson, who adds © that this also slows the systems down and causes crashes that frustrate the user. “We’re approaching Travel Choice with the angle that it must be fast and simple and get as much information across as possible,” he says.

On the other hand, there’s no doubting that in a notoriously disloyal market, distinctive Web design can be a major issue to not only differentiate between sites, but to also build up the same brand identity between the different media – many customers will have interacted with the travel agent in several different ways – call centre, Web, shop – during the course of one transaction.

This is something that Internet-focused operators such as budget airline EasyJet don’t have to worry about so much. EasyJet has been left instead to concentrate on creating an effective Internet site, designed in-house, which currently takes 70 per cent of the company’s bookings. It hopes to go to 100 per cent on-line bookings by next year.

“In this vast, faceless, virtual environment it’s important to have a strong identity – we are orange, we are easy,” says James Rothnie, director of corporate affairs at the EasyGroup.

Travel sites are becoming more customer-focused and lively, says Razorfish’s Kelly, who expects his consultancy’s work on the Fitch-designed Thomas Cook site to reflect these trends: “At the moment most are hideously flat. Thomas Cook realised it could differentiate itself by bringing some of the excitement of getting on a plane to the site,” he says.

But existing brands such as Thomas Cook have to walk a tightrope to ensure consistency on the Internet with company brand values – the site must embody the inherent trust associated with the company.

“We certainly want the Internet site to reflect the values of Thomas Cook. People like to know who they can trust when using the Internet,” says a spokeswoman for Thomas Cook, who predicts the next challenge to the sector will be to offer a more personalised Internet service, one that, for say a skiing holiday, would also offer you clothes, equipment and weather advice/ retail opportunities.

But while brand consistency – such as that being developed by Checkland Kindleysides for Lunn Poly – is important, it has to be handled with sensitivity to each medium. Design House’s Hudson says there are dangers in seeking to achieve too much consistency, and that designers should be aware that different media need to be approached in different ways.

“The challenge is to reflect the brand on-line without compromising the usability of the site,” he says. “You just don’t have the time to keep selling yourself through the site – it’s such an immediate medium. Usability and content are definitely more important on-line. In a shop you have the ability to do a lot more in terms of graphics that you shouldn’t try to do in an on-line environment.”

This includes the integration of screen graphics into stores, with customers seated side by side with the travel agent or at Internet areas with or without staff assistance. Having developed its website in 1998-99, Fitch is now working with Thomas Cook on its in-store screen system for use by consultants in conjunction with customers.

“There’s an opportunity for the Web to bring a lot of graphic richness to the experience. It’s almost part of the holiday,” says Fitch senior designer Tobias Lee, adding that the site content will not be a literal translation of the brand but will instead pick up on certain values.

Not all travel companies see the need to embrace Internet opportunities. Trailfinders, the UK’s largest independent travel company, which specialises in tailor-made holidays, has an information-only website designed in-house. It requires customers to call up or drop in to their shops in person, preferring to offer a one-to-one service that reflects its custom holidays.

“People want to pick our brains and you need the human touch that you can’t get on the Internet,” says Trailfinders assistant marketing manager Susan Guy.

Yet Trailfinders is keeping its options open, and it is unlikely that any travel agents, however expert, will be able to afford to ignore the Internet as a commercial tool for much longer.