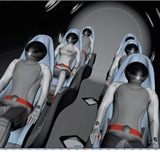 The interior design is based on enhancing the zero gravity effect that will be experienced by passengers during the spaceship voyage. Interiors could evolve as the project develops and are a ‘conceptual’ scheme at the moment, says a spokeswoman for Seymour Powell. The design is fitted inside a SpaceShipTwo craft, a model based on a design by aviation designer Burt Rutan and space entrepreneur Paul Allen.

The animated film shows the virtual journey that will be experienced by passengers and reveals future design possibilities, such as how the astronaut sits and how helmets could look.

The first glimpses of the interior scheme show a minimal design. Seymour Powell has designed a six-seater cabin with bespoke, moveable seats that are positioned in three rows of two. A bulkhead divides the passengers from the pilot. It features four large-scale dials, which show passengers the flight mission time, speed, altitude and changing G-force. The interior also includes 15 windows, with some located in the floor, to give a panoramic view of space.

The specially designed seats will shift from a 60-degree upright angle for take-off into an almost horizontal flatbed position. This will allow passengers maximum room to float around in the aircraft. When the spaceship re-enters the earth’s atmosphere, passengers will come back into their seats, which will remain in the flatbed position to help overcome the effect of G-force. The seats will then return to the upright angle for the rest of the flight home. ‘The key part was the weightless experience. We wanted as clean an interior as possible,’ says Dick Powell, director at Seymour Powell.

Starck has also designed blueprints for the construction of the first dedicated private spaceport, located in New Mexico in the US (DW 15 December 2005). He has a creative director role at Virgin Galactic, a company established by Richard Branson’s Virgin Group.

The fleet of spaceships, VSS Enterprise, will launch with flights in 2008. The VSS Enterprise will be carried underneath a mother ship to almost 15km above sea level, before it is released. The spaceship will come back into the earth’s atmosphere at around 25km.