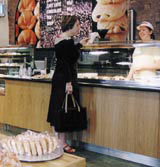 Lumsden Design Partnership has created a retail format for Ainsleys, an independent baked goods and sandwich chain in Leeds. The design is likely to roll out to the company’s 40-outlet estate following a successful trial of the concept.

The project, which is worth up to £50 000 in fees to the consultancy, was instigated in response to growing competition from high street chains such as Pret a Manger, says LDP managing director Callum Lumsden, who designed Ainsleys’ existing look and identity five years ago.

‘Ainsleys has woken up to the cafÃ© culture and the fact there’s a lot of choice for people who want a good, lunchtime takeaway sandwich. Leeds is a trendy city and Ainsleys doesn’t want to be left behind,’ says Lumsden.

Without jeopardising the brand’s reputation for product quality, the brief was to enhance the retail experience and appeal to younger customers, described by Lumsden as ‘the mobile coffee generation’.

The trial outlet is located in converted railway arches and the design was able to exploit their height and the peculiarities of the space. LDP introduced an upper ceiling, stone floor and uplighting to create a ‘subtle area’ focusing on customer flow, says Lumsden.

Ainsleys will now decide which elements can be translated to its other outlets around Leeds, as well as to any new sites. Lumsden says he is encouraging the company to consider ‘architecturally interesting spaces, not [rolling out] high street clones’.

LDP senior designer Helen Gubb also worked on the project. The consultancy was appointed in February without a pitch.

Young designers to meet up again

Young designers to meet up again