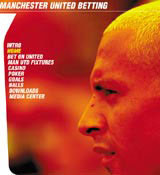 The project, which is worth over £50 000 to the consultancy, is part of Ladbrokes’ strategy of ‘being number one for football’, according to Ladbrokes head of interactive development Ismail Vali.

‘We have shops in the stadiums and wanted an end-to-end expression of our relationship with football so took the betting on-line as well,’ he explains.

Vali says Manchester United are the ‘lynchpin relationship’, but the concept will be rolled out to other Barclaycard Premiership clubs.

Due to be handed-out at the club’s home matches from next month, the CD-ROM is likely to feature video footage of pre-season highlights, fixture lists, screensavers and images. NWYH creative director Angus Mackinnon describes the concept as a ‘goodie-bag for fans’.

The website, which launched last week, offers fans an on-line betting service covering football and other sporting events, as well as providing links to Ladbrokes Casino and on-line games.

Mackinnon says, ‘The challenge was to work within both Ladbrokes and Manchester United guidelines and try to marry the two.’

NWYH began work on the project at the end of July, having been appointed following a creative pitch against three other consultancies and will be involved in the roll out of the concept.

Industry is full of leaders, but it does lack leadership