Frank Stephenson’s work can be seen on most British high streets. In 2001, he designed the updated MINI Cooper. As chief designer at BMW (which bought MINI’s parent company Rover in 1994), he also designed the first BMW SUV, the X5. At Fiat, he brought the updated Fiat 500 into production. In 2013, that car model accumulated over 1m sales in Europe. On more salubrious streets, you might see his work for Ferrari-Maserati including the Maserati Gransport and the Ferrari F430 – he was the brand’s first ever director of concept design and development. Today, Stephenson is talking to Design Week about child seats. 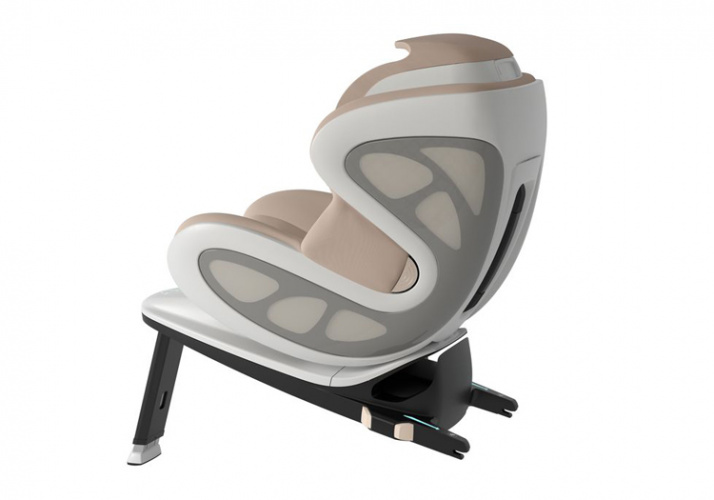 Specifically, the lack of innovation in this “static” field. Since 2000, Stephenson says that little has changed in terms of design: “It’s been like ‘okay, that’s going enough, let’s just leave them as they are’, but if we had that attitude with everything, we’d still be living in the dark ages.”

A “giant leap ahead”

Enter the BabyArk, a year-long design project set to be released next year. It is the first product from the brand of the same name, and has been designed by Stephenson’s eponymous design studio. It is the result of the designer’s interest in cross-industry research. While his background is in automotive design, Stephenson has looked at materials used by the military as well as using nature as an inspiration. “A lot of times in design, we tend to stick with the standard ways of designing things, and that locks us into a one-track design approach,” Stephenson says.

The seat – built for 0-4 year olds – absorbs energy through a system that the design team calls ‘spiral technology’. Every child seat that goes into the car has to be attached to a base. If a car is hit from behind, all the energy is usually absorbed by the seat on a standard baby seat, according to Stephenson. On the BabyArk, a leg stabilises the egg-shaped seat and base, which the baby is placed into. If there’s impact from behind, the spirals located in the base extend, absorbing the energy. 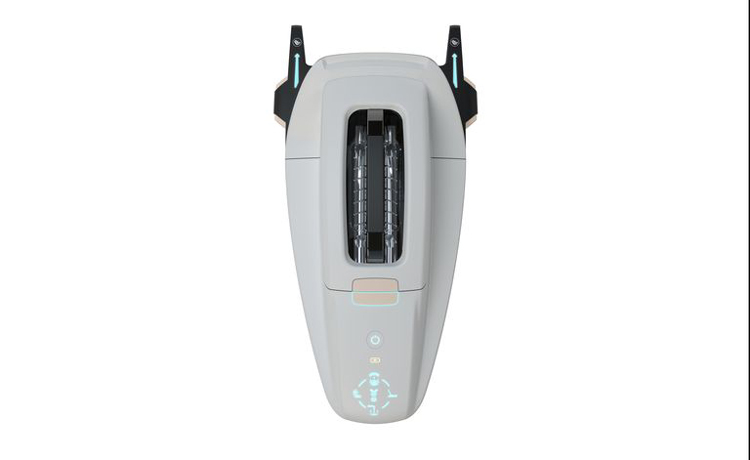 In terms of energy absorption, Stephenson says that recent findings at an Amsterdam test site showed that it was nearly 70% more safe than other baby seats on the market. The designer calls the BabyArk a “giant leap ahead” that will “put pressure on the industry to respond”. With its egg-like shape, it’s also a departure in terms of aesthetics, which Stephenson says is a conscious choice from the “boring” designs currently available.

The core element of the product is carbon fibre, while the seating and padding areas are covered with a bio-leather which Stephenson says is almost exactly like real leather. It’s also not a complete departure from some of the supercars he’s designed. There’s a transparent polycarbonate skin which means you can see the mechanics, in a similar way to how a glass panel or polycarbonate panel might show off the engine of a supercar. Stephenson likens this to showing off the “heart and soul of a car”.

Stephenson’s last automotive gig was as design director of McLaren, which he left in 2017 after nine years. In 2018, he set up his own studio, Frank Stephenson Design Consultancy. This has granted him a certain freedom, and he now has a manifesto of four points to filter projects. The first is that the project has to be the best in the market – not necessarily luxury, but that it is not “middle of the road”. Secondly, it must bring “technical innovation”.

The third is that it has to have a sustainable slant (the BabyArk contributes to the circular economy as it can be refurbished after children have outgrown it). The fourth is that it has to involve biomimicry – design that is inspired by nature. “It’s a free and intelligent way of designing,” he says. “It tends to last on the market for a long time because nature doesn’t change every year.”

The spiral technology, for example, is based on the skull structure of a woodpecker. As he explains: “One of the animals that has to have huge energy absorption capabilities is the poor woodpecker, that’s beaten its head against a tree trunk,” he says. “And you think what the fuck is he doing?”

But if the woodpecker can do it, there must be something about its design that tolerates the “energy impact”, he says. The bone structure, and the way the animal’s organs are connected provided an inspiration for the BabyArk. The egg, and its oval-shape, is known in nature for protecting the (very) young, so Stephenson looked at design elements, such as stress points. It’s all “intelligent inspiration from nature”.

While biomimicry is often seen in conceptual design or on small-scale projects, Stephenson believes that it has market appeal. Because the baby seat is inspired by natural shapes, it will look familiar to people. “It looks comfortable right from the start – it doesn’t shock you, and looks naturally beautiful,” he says. That’s important when designing a product for parents – “when you’re introducing industrial technology innovation, the last thing you want to do is to make the product look like a mechanical object.” He adds: “It needs to look almost huggable.”

“How many lives are you going to touch?”

It’s likely that people buying a baby seat and supercar would be at different stages of their lives – they are very different design projects. And how exciting can it be to design a child seat after envisioning supercars? “The truth is it’s as exciting as designing a super car,” Stephenson says. “If it’s going to bring good to society, it’s a fun project. But the main thing is how many lives are you going to touch? With the supercar market, you reach the few and far-between.”

We won’t know how many lives the BabyArk will save for a while; it will be sold next year via a direct-to-consumer model. Whatever the outcome, it seems that Stephenson is enjoying the freedom to apply his design approach to a wider range of projects – an approach which begins with research.

While a lot of designers start with drawing, it’s the last thing he does. Research involves looking at what’s already been done; “I don’t like to start from zero,” he says. “Standing on the shoulders of giants,” as he says, doesn’t just mean other designers. That includes nature: looking at the woodpecker’s evolution, for example. “I spend a lot of time thinking,” he says. “It might look like I’m doing nothing but my mind is thinking, thinking, thinking.”

What is he currently thinking about? He is involved in a design project for smart glasses in the vein of Google Glasses, which he believes “never really made it because they’re so geeky looking”. The tech is 99% invisible, Stephenson says. The glasses could tell you the route from Piccadilly Circus to Covent Garden, for instance as well as biometric information like heart rate. Potentially they could play music without headphones, using sonic vibrations. “You could be listening to music and nobody would know you’d be listening,” he says.

Again, the emphasis is on design that seem “familiar” so that consumers can imagine themselves using them. “You want the wow factor and the love at first sight factor but if the design is something you have to get used to, it’s not good design.”

Companies don’t push innovation enough because of cost and risk, he says. It often involves a reliable investor. But again, looking across the sector can help. Like looking at materials used in industries such as the military, where there is a “lot of innovation in terms of saving lives”. “That is a great way to adopt technology that’s been developed,” Stephenson says. “It’s a source we should tap into – and governments around the world sponsor innovation through design, like university research.” 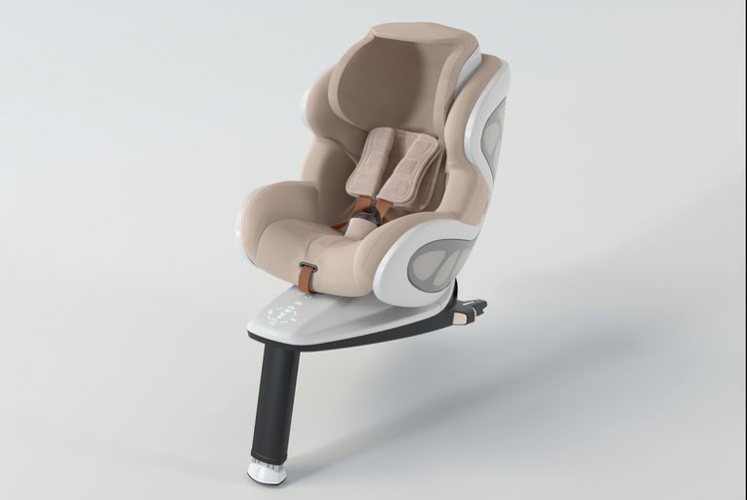 Stephenson cannot pick a favourite from his many recognisable car designs – “you love them for all different reasons.” It’s also not impossible that we might see another Stephenson-designed vehicle in the future. “Doing a car again would be absolutely fun,” he says. “I wouldn’t want to get back into the industry and design again for a car company where you have to design a range of cars for ten years. But designing a one-off can be fun.”

At a time when the automotive industry is on the verge of something big – electric vehicles, self-driving vehicles – but many vehicles remain conceptual, could cross-sector push things forward? “Possibly,” he says: “If you don’t get out of the rut, everything becomes too predictable. The idea that you can look out of the industry for inspiration is good.”

And while he wasn’t a fan of the Tesla Cybertruck, Stephenson says that an unusual design concept can have a power. It can “kick off a lot of conversations and inspirations”. “Suddenly all over Instagram, and design websites, people are using that design language for other products.”

This type of inquiring mindset seems to be Stephenson’s mantra, and a clue to his success. “Designers who get it right most of the time are pretty obsessed with curiosity,” he adds. “It’s a huge element in a designer’s vocabulary and lifestyle.”