Civil liberty membership group Liberty has been given a new identity by North.

The London-based design studio’s identity includes a new logotype, colour palette and brand campaign, in an attempt to make the organisation “more visible”. 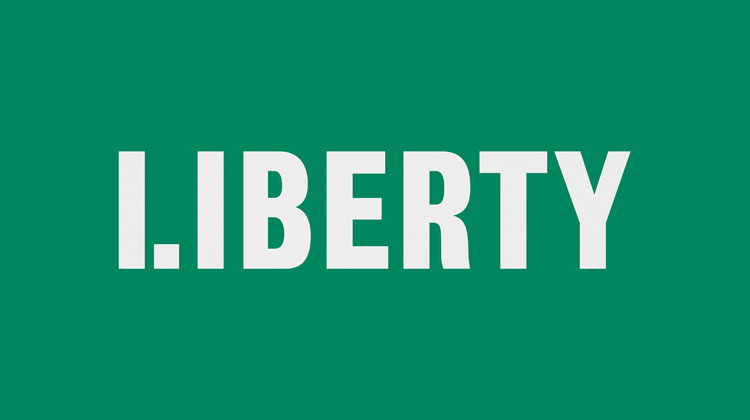 Liberty was set up in 1934 as an advocacy group and membership organisation. Throughout its history, it has campaigned as a pressure group in court and government.

Recently, it has been involved in challenging the Investigatory Powers Act (which sets out the parameters for electronic surveillance in the UK) and called for an end of indefinite immigration detention in the UK. It has over 10,000 members.

This is not the first time it has an identity change; in 1989 it changed its name from National Council for Civil Liberties to simply Liberty. 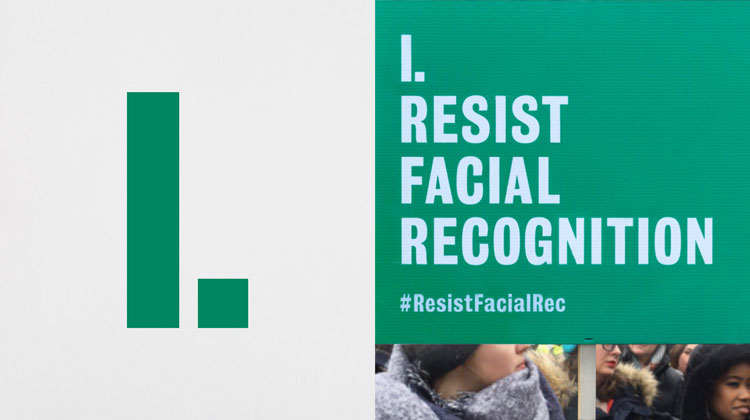 Failing to keep up with “cutting-edge” work 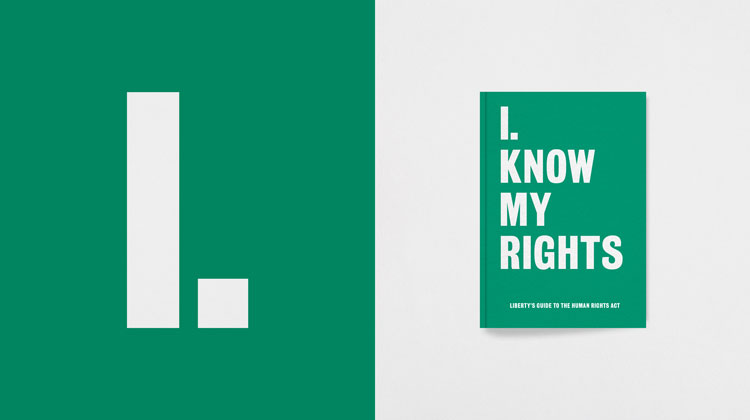 According to North, Liberty’s visual identity was failing to keep up with the “cutting-edge” nature of its work. “Campaign material visually lacked strength coherence and a clear voice,” the studio adds.

The previous black and white identity, with a serif font appeared “old-fashioned” and lacked coherency. It was “associated with Westminster elitism and the legal bubble of the UK’s political power centre”. North says the new identity is an attempt to engage with a more “diverse” membership.

Julian Goll, a graphic designer from North, tells Design Week: “We wanted to create a clear, timeless and distinctive visual identity that conveys Liberty’s values and activities across all platforms and audiences.” He adds that it needed to work on legal documents too.

The most prominent feature of the new identity is a new logotype, which features a double L and I character. Goll says that this character combinations “expresses the dichotomy between the organisation and the individual” and “provided the formula for a singular and recognisable voice”.

While the ‘L’ can be used as a symbol, it can also represent the letter ‘I’ on copy. For example, on the cover of a guide, it is used in the headline: ‘I know my rights.’

“With this device Liberty can easily create consistency of messaging across campaign and other branded materials,” Goll adds. 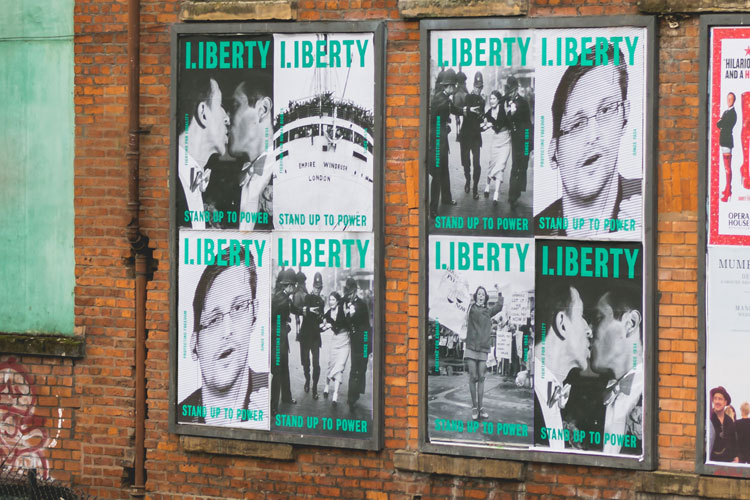 The second most obvious update is its colour palette, which now features a green shade. It is used for the logotype across visual material, as well as a background colour for copy.

Liberty is independent, and the groups “principles are guided by evidence, expertise and human impact” not political affiliation. When choosing a colour, it meant that “politically charged” shads such as red and blue were not an option.

Green was chosen after an analysis of competitors in the human rights and legal sector. There was also another more off-piste inspiration: the Argentinian women’s rights movements. Goll says that the movement uses “trademark handkerchiefs in a beautiful green-blue tone”. “We would like to pay homage to their campaign,” the designer adds. 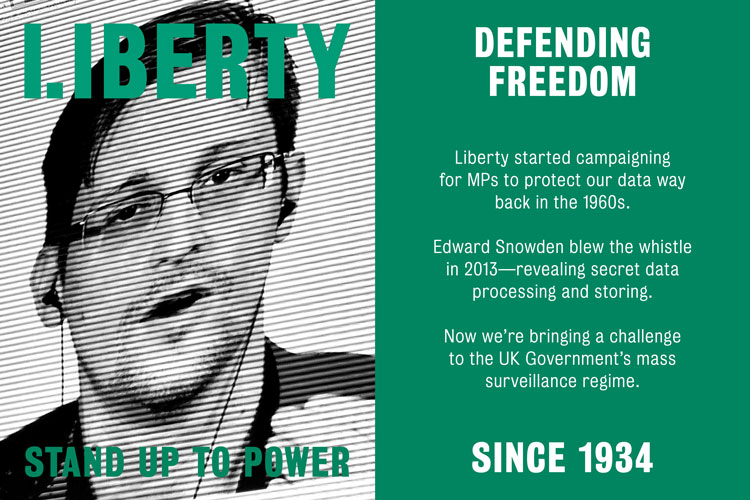 To coincide with the new identity, North created visuals for a poster series for a brand campaign. This uses moments from the organisation’s “rich history” to showcase its work over the past 85 years.

One moment shows Peter McGraith and David Cabreza kissing. In 2014, the pair were among the first same-sex couples to marry in the UK. Another is themed around the Windrush movement, showing a boat that transported Commonwealth citizens to the UK in the 1960s. At the time, Liberty campaigned against immigration laws that sought to strip these Commonwealth citizens and the group is currently “working to bring down the policies of the ‘hostile environment’”. 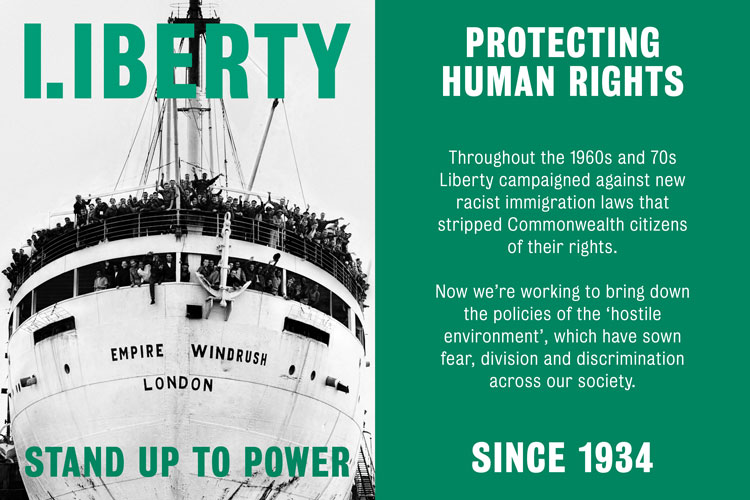 Other posters show the whistle blower Edward Snowden, while another highlights Liberty’s work in defending protestors’ rights. All feature the tagline: ‘Stand up to power.’

The typeface used across the identity is Bureau Grot, in Condensed Bold and Light. It was chosen for its “approachable quality” which still manages to “stand out”, according to Goll. 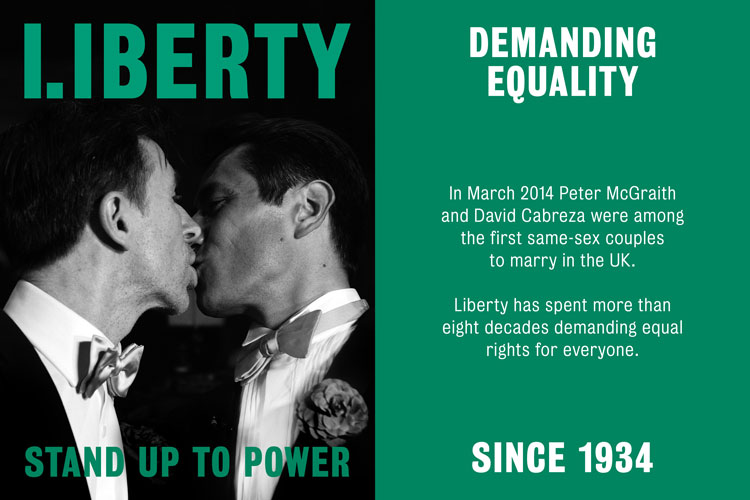 It is fitting that these designs look somewhat like film posters, as some of Liberty’s landmark cases have made it onto cinema screens.

With the campaign, the studio wanted to “juxtapose historic and more recent issues in order to highlight what a crucial and dynamic role” Liberty plays in the UK. Black and white photography was used in an attempt to “create a sense of urgency”, Goll finishes.