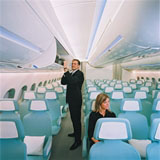 The design pits itself against Boeing’s Dreamliner aircraft model, and ups the ante by introducing innovative features – such as mood-enhancing virtual images that are projected onto the ceiling – into the cabin interior.

The designs will be implemented across the company’s suite of A350 aircraft, which will initially comprise two airplanes, the A350-800 and a larger model, the A350-900, both due to enter service by 2010.

According to Paul Priestman, director at Priestman Goode, a key feature will be a more flexible layout whereby seating, lavatory and galley positions will be interchangeable through the use of what Airbus describes as new ‘snap and click’ technology.

The cabins will include larger windows, advanced lighting systems and more spacious overhead lockers, which will enable passengers to carry more than one roller bag each.

The entrance area is also designed in a circular formation, to integrate more social areas into the space. Interactive technology will offer passengers wireless access to Internet and e-mail, as well as allow the use of mobile phones.

Priestman Goode worked on the project alongside Airbus design teams located in Germany and France. The consultancy has a long-standing relationship with Airbus, having designed its Super-Jumbo double-deck aircraft four years ago. ‘This is a very big project for Airbus, enhancing the passenger experience overall,’ says Priestman.

The A350 cabin is being launched at the Aircraft Interiors Expo in Hamburg this week. More than 180 orders have been placed for the A350 model so far. Customers include Air Europa, Bangkok Airways, Finnair, Qatar Airways and US Airways. Manufacturing is expected to commence early next year to support the assembly of a prototype in 2008.

Airline design is becoming increasingly competitive as international travel continues to boom. British Airways is poised to relaunch its Club World service – with Tangerine, Davies & Baron and Winkreative collaborating on the project (DW 23 March) – and Softroom continues to work on Virgin Atlantic’s Clubhouse.