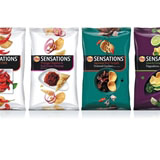 Walkers is introducing the first redesign of its Sensations crisp range since its launch in 2002, with a packaging overhaul by Landor Associates.

The relaunch aims to raise Sensations’s on-shelf impact, after Walkers found the brand image to be ‘tiring’ in the face of designs from competitor brands. According to Landor creative director Derek Johnston, the consultancy needed to make the product ‘sharp and relevant again’.

‘The original design has been copied quite a lot. We had adopted a vernacular of fields and the story of ingredients – a desire for ruralness – but, as time has gone on, that style has got a bit tired. The idea is to cut a clear differentiation between snacks you just munch on and those you savour,’ he says.

Photographer Sian Irvine was chosen to produce the food images, which are shown in a vertical cascade down the front of the packs, as ‘a chef may have tossed them’, says Johnston. The crackers and poppadom products are positioned as ‘slightly more premium’ and feature coloured backgrounds, rather than the standard black-and-white coding of the eight core crisp flavours.

According to Walkers marketing manager Victoria Roberts, the relaunch aims to drive up the brand’s premium associations using new flavours and improved ingredients. ‘As with any leader product, people will follow and we need to stay a step ahead,’ she says.

UK has strong design leaders as well as creatives