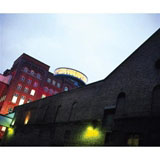 The Guinness Storehouse in Dublin, the brewer’s brand experience visitor attraction, has appointed Event Communications to lead its design strategy for the next three years, as it embarks on a comprehensive revamp of the centre, which will see the Storehouse evolve both its brand identity and interiors.

The Storehouse is seeking to update the venue’s image, which was created by Imagination almost six years ago (DW 22 September 2000). The new brand identity will be launched by next summer and the Storehouse’s marketing department is managing the project in-house, says Eibhlin Roche, Guinness archivist at the Storehouse.

The Storehouse will redevelop its existing spaces and create fresh exhibition areas, although Roche declines to reveal further details of the schemes at this stage.

Additionally, the entrance to the listed steel-framed building will be redesigned and the general orientation throughout the venue will be re-evaluated, with a view to installing a revised wayfinding and signage system. Some of the projects may be put out to pitch, but Event Communications will remain a key design partner throughout, stresses Roche.

‘It was time to re-evaluate what the brand means for the visitor experience. We are working towards a three-year plan and are undertaking a series of redevelopments,’ she says.

Event Communications’s appointment, replacing Imagination as lead design group, follows its completion of a €2.5m (£1.73m) project to re-envisage the Storehouse’s ground and first floor with a more interactive exhibition design that explains the brewing process. It has reinterpreted the space, installing additional video elements and introducing the concept of a brewer guide and a tasting laboratory where visitors can sample Guinness from the keg line. Event Communications was appointed to this project in April last year, following a four-way pitch.

‘We could see that some consumers were not fully engaging with the brewing floor experience, so we wanted to concentrate on creating something new,’ adds Roche.

The Storehouse is situated in a six-storey fermentation building, built in 1904 and featuring more than 16 000m2 of floorspace. Its centrepiece is a giant atrium shaped like a pint glass, topped with a 360 degree public bar called Gravity.

2007 – New brand identity to be launched with in-house design