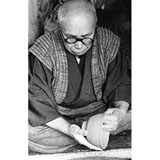 Recently, I spoke at Meeting of Minds, debating the influence of design on our culture. Not long before this, I had my eyes opened to Shoji Hamada (pictured), arguably Japan’s finest potter, of whom I spoke.

Life, work and the man were inseparable. The philosophy that directed his work was head, heart and hand – creating ceramics through intuition and instinct. Hamada lived with Buddhist warmth and simplicity, yet his work was hugely, commercially successful. His quiet influence was immense, receiving the Order of Culture from the Emperor of Japan.

Each evening, at his home/pottery, everyone would gather to eat. Hamada loved telling stories. There is a beauty in what he told and there are answers to be found from looking past the obvious. He related a story (passed to him by the St Ives potter, Bernard Leach) of an old man who was nearing death and was worried about how he should die. He wanted to die peacefully and asked a Zen master how to do it. ‘Just die’ was the advice. Soon he died and, shortly after, the master died too. Leach had told Hamada this story to illustrate how he had overcome a problem: how to trim bowls with the perfection that he so admired in the work of Korean potters. Then suddenly Leach remembered the old man’s story: ‘That’s it. That’s how they [did it]. They just trimmed them. And that’s how to do it… just do it.’

This has made me look at the struggles with my work over the past 20 years. I now can see my best solutions were intuitive – the moment I stopped thinking, and just did it.