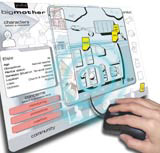 With the public’s perception of design unclear, Nick Durrant thinks making use of ethnographic techniques may be the key to unlocking design’s true potential

Ever since the concept of ‘lifestyle’ infected the media and entered our everyday vocabulary, people have tried to work out how it relates to ‘design’. There’s now an ongoing debate about what design really is, what it’s for, and where it fits into contemporary culture. In fact, you could say design suffers from something of an identity crisis, because the debate has gone in two distinct directions. Let’s call them the fantasy genre and the reality genre.

In the first scenario, the designer becomes the glamorous hero; a player in history, surfing the media’s appetite for celebrity content. He or she aspires to become part of a cultural reference system that includes Phillipe Starck, ‘designer jeans’, hip hotels and even Changing Rooms. Here, design and designing act as a prop to fashion – a media fantasy of the ‘style’ part of lifestyle.

We all know the reality of design is more anonymous, modest and discrete – but with bigger ambitions. It’s concerned with the ‘life’ part of lifestyle, seeking to intervene in ‘the revolution of everyday life’. Its topic: mundane behaviour. Its obsession: the qualities of the ordinary. At the moment, it’s perhaps best exemplified by product and service innovation groups like Doblin, Ideo, and DEGW, which use modern research practices like ethnography to observe and immerse themselves in people’s real lives, though major product design groups also use ethnographic techniques.

Ethnography literally means ‘culture writing’. It stems from the human sciences of cultural and social anthropology, which are concerned with the inner workings of human cultures or social groupings. It’s about the in-depth study of people in their natural settings, using qualitative methods.

In the past we lived in one homogeneous culture, largely defined by our nationality. Designers could design for themselves, safe in the knowledge that what they created would suit pretty much everybody else. Now our culture is comprised of many different sub-cultures, movements and tribes, each having a quite exclusive set of behaviours. A designer (wearing the badges of the ‘designer’ tribe: the Hoxton fin and stained ‘£300’ vintage Levis) can no longer presume to design for the masses without doing something to understand what the masses want. Something like design ethnography.

Ethnography and design share an obsession with ‘the obvious’ – one seeks to analyse it, the other to synthesise it – and as a result tiny distinctions can have huge consequences. Gillian Crampton-Smith [former Royal College of Art computer-related design head, now Ivrea Interaction Design Institute director] once described the impact of her family’s purchase of a domestic refrigerator in the 1950s. She talked about the refrigerator’s form – ‘vaguely streamlined against the hurricane forces of modernism’ – and also its function, which liberated female members of her family from time-bound kitchen rituals to participate in the workforce and wider society. An insightful assessment of the impact and interplay of design, technology and society.

The way we as designers can use design ethnography in practice is by doing ‘participant observation’. Conventional research has long had a problem with the fact that often people can’t say what it is they are doing, and just as often don’t do what they say they do. In the world of work, for instance, ‘exceptional’ ways of doing something often turn out to be the rule. The official story turns out to be a convenient fiction. Better insight can be gained through first hand, non-judgmental observation of the intended users.

A variety of observational techniques, such as living-with-the-problem and acting-it-out, can generate insights into people’s real lives and worlds. These are documentary techniques – and we can learn a lot here from reality TV shows. But design ethnography isn’t something that you always have to pay a design ethnography company to do for you. The key skill is empathy – how does it feel? – so it’s best if you do it yourself.

Design ethnography should not be restricted to the formal research phase of a design project. As designers, we should be constantly equipped with a digital camera, a tape recorder, or at least a pencil and paper, to make observations that can lead to a moment of insight.

Ethnography’s impact on design theory has been both an inspiration and a means of refocusing attention on what is important. Themes such as humanising technology and socially inclusive design are finding their way on to corporation agendas. Industrial design has evolved towards interaction design; form-giving makes way for behaviour-giving.

Ultimately, design ethnography forces a re-evaluation of the nature of design work: the role of the designer is to interpret the needs of the user. It also helps with repositioning our work: design adds the most value when considered from the beginning of a development process rather than at the end.

At its worst, design ethnography may get hyped and appropriated by the style fantasists seeking legitimacy for cool hunters, street trend merchants, focus-group futurologists and (ick) ‘culture-brailling’. At its best… well, you know what you should be doing, don’t you?