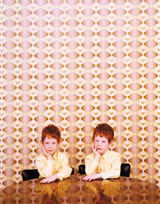 Ever since photography was invented, portraiture has arguably been the most popular genre. Hardly surprising then that in the past ten years the John Kobal Photographic Portrait Awards at the National Portrait Gallery were so highly acclaimed and well attended.

Now a new sponsor has been found and this week sees the first showing of the Schweppes Photographic Portrait Prize. But with 1212 photographers submitting 3000 entries at £10 per image, the majority of sponsorship would appear to be coming from the participants.

No longer merely an award, this has become a prize – £15 000 from Schweppes for the overall winner and £5000 from Deloitte for best portrait taken by a photographer aged 25 or under. With that kind of money on offer, the prize is safely up there with the most prestigious in the art world as well in photography.

The judging panel (which included Alison Jackson who created the images for the recent Schweppes campaign by ad agency Mother) selected only 60 images and took the unusual step of announcing a shortlist of four photographers who are in line for the big prize. The winner is Scottish photographer Roben Antoniewicz, for his portrait of his granddaughter Mairead taken on her second birthday.

According to National Portrait Gallery director Sandy Nairne, this prize ‘had an outstanding entry for its first year and now the public have the chance to come and see some great winning photographs. Antoniewicz’s 2nd birthday stood out as a remarkable image of innocence.’

But what is this selection telling us about the current state of so-called new photographic portraiture? Quite a lot of editorial bland mixed with Diane Arbus-lite. Medium-format, shot on colour negative, with flat lighting. People being photographed for some project or assignment, unaware of what will happen to the end result.

There are notable exceptions, though, like Adri Berger’s stunning, fashioned portrait of ‘Charlotte’, used here to great effect, as a giant enlargement, to draw visitors into the National Portrait’s show.

Apparently, submissions needed to ‘…interpret the portrait in its widest sense … with an emphasis on their identity as individuals.’ Interesting then that many of the captions fail to name the sitters or give us any clues as to their identity or the context of the work. Instead, we are treated to titles like Interruption or Powernap. Then there is the overused Untitled caption.

One such shows a man closely resembling Rolf Harris, in a wheelchair, shopping in a supermarket. Is this an attempt to emulate Jackson’s celebrity look-a-like work or am I just reading too much into it? Ambiguity? Second-guessing the taste of the judges? It’s all here.

In terms of subject matter, it’s spookily like a re-run of the Kobal Awards. Lots of pictures of children, here interspersed with families and sad looking middle-aged white people and a smattering of the usual Third World images. Some of these people are famous – a stagily dramatic John Malkovich, a sassy looking Tracey Emin at 40, a pre-War snapshot of a stressed out Tony Blair or an immaculately overconfident Mary Archer.

Lesser knowns and unknowns have made it into this mix of photographers, along with the usual hardcore editorial and documentary types (like Harry Borden and Zed Nelson), plus people crossing over from fashion and advertising (such as Nadav Kander, who won the fourth prize with Interruption, and Trish Morrissey).

Personally, I would love to have seen the other 2940 portraits that never made it into this edit. Perhaps next year we could see all the images on a website so that people can vote for their favourite.