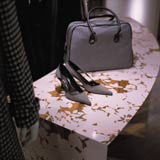 ‘He felt the architecture was working well but wanted another layer. We term it a “graphic infection” which adds a bit of interest to surfaces that would normally be blank,’ says Made Thought’s Paul Austin.

It first created graphic patterns – floral for womenswear and geometric for menswear and then tackled everything from windows to furniture. At Brent Cross, a floral pattern was printed on to optically transparent film generally used as an anti-bomb device and then applied on to the glass shopfront. Within the stores, Made Thought screen-printed directly on to the sides and tops of the wooden display tables using a printing bed that could cope with the 50ml thickness. Other tables are treated with colour-fade film. At the Bluewater store a cumbersome boxed-in structural column was used as another surface for ‘infection’ – Made Thought stripped the column back to its bare concrete and re-boxed it into a glass case covered internally with the printed pattern.

‘It almost looks like an installation – making something that you’d normally hide away a focal point,’ says Austin.

Following the store implementation, Made Thought is now turning its attention to new packaging for Reiss.