Hidden London looks unfinished at first. There is debris outside the entrance, made to look like a Tube station — construction signs, building materials, newspaper stands — but it is all part of the exhibition’s “deconstructed look”. Sau-Fun Mo, the museum’s head of design, says that this focus on atmosphere was her aim for the exhibition.

The exhibition recreates abandoned Tube stations, like Down Street station, where Winston Churchill stayed safe in the Railway Executive Committee’s bomb-proof headquarters during the Blitz. Aldwych’s “historic ticket office” has also been recreated, aided by instantly recognisable design details such as the tiles used by Leslie Green, the English architect who put his distinctive stamp on London’s Tube stations at the turn of the century.

As visitors pass through the station replicas, they can see objects, photographs and sketches from Underground archives, some never seen before. 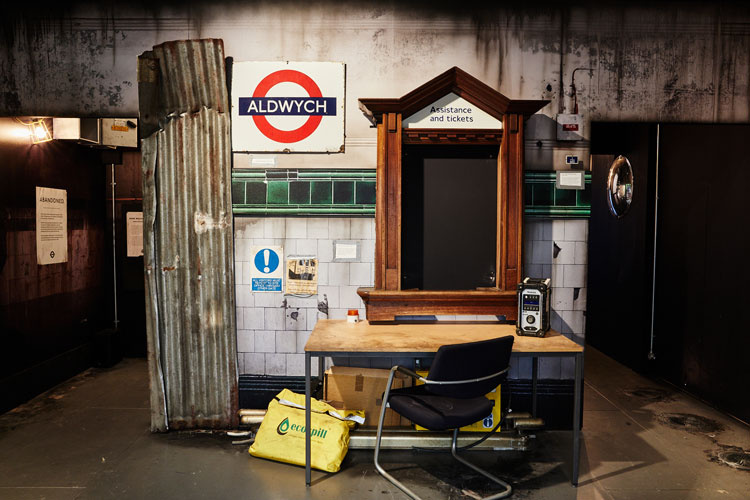 Mo wanted to create “Scooby-Doo moments”, where no one wants to be left behind during a chase; an experience Mo says is linked with being in abandoned tunnels. During the research period, Mo spent time in these “spooky” tunnels where “no one wants to be last one in the group”.

It was not always easy to replicate these spaces in the museum, located just off Covent Garden piazza. And clearly the recreations are not completely realistic.

Instead, the design relies on a sense of atmosphere, particularly lighting, which is obvious as soon as visitors enter the dimly lit exhibition space. 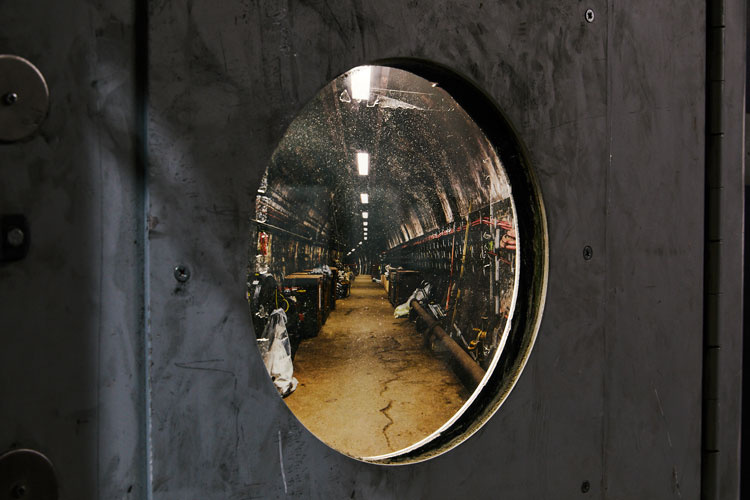 Design details convey these abandoned places. A spiral staircase connects the two floors, which might remind visitors of the busy interchange at Bank station.

Exhibition rubric is not neatly applied to walls but instead stuck up with gaffer tape. There is ivy growing over the walls of the section dedicated to the Highgate tunnel where bats shelter and people are not allowed.

The physical constraints also became more conducive to the exhibition during the design process. “We’re limited in terms of ceiling height, and length of the gallery, but it did lend itself well to replicating those spaces — the tunnels, the narrows spaces,” she says. “In some ways it was an advantage.”

Sound (and sight) of the underground

Audio-visual plays a big part of the exhibition and helps to create this sense of atmosphere. There are air vents on display which visitors can peer through to see bird’s eye footage of a Tube platform. Recordings of trains coming and going play throughout to give a sense of being underground. There are also flashes of light, to mimic the unexpected sights of being underground.

“Through light and sound, we’ve produced a space where you suddenly jump when you hear something, or a flash of light catches your eye,” Mo says. “That’s exactly what happens when you go through those spaces.”

Video footage comes from the museum’s archives as well as from films that used the underground stations as their backdrop. Films that have used the stations include V for Vendetta (2005), Sliding Doors (1998) and the James Bond film Skyfall (2012).

“We wanted to give people a sense of familiarity,” Mo says. “If they’ve seen that film, they can think: That’s how that was used!” 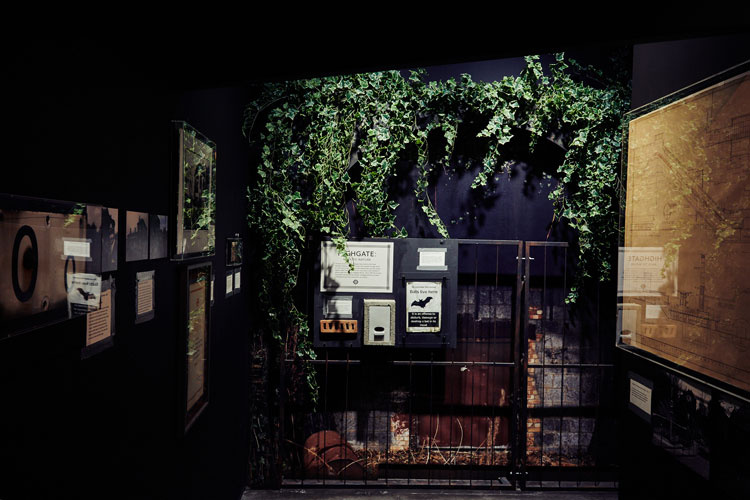 One of the stand-out parts of the exhibition is a recreation of a dining room where Churchill took shelter during the Blitz. Mo says this was a challenge to recreate as there was no official documentation of the shelter at Down Street, the headquarters of the Railway Executive Committee.

Part of why documentation was scarce is because the headquarters were not publicised; during wartime Britain, Churchill was treated to caviar, Champagne and cigars. Mo says the recreation was realised through “evidence” from the space, such as marks where clocks had been, or where table legs have left imprints. “A lot of work had to be done from what was left behind,” she says.

The museum hopes that the dining room might be a potential venue for companies to hire. It is rolling out a series of Friday Lates, part of a wider trend for museums and galleries seeking new audiences.

The exhibition has been preceded by a book, Hidden London: Discovering the Forgotten Underground. Co-authored by David Bownes, Chris Nix and Siddy Holloway, it explores disused stations like King William Street, Down Street and 55 Broadway.

From the lost tunnels at Euston to the deep-level shelter at Clapham South, the book is an expansive look at the Underground, with images from previously unseen archives.

Part of the challenge in transferring to a physical show was picking which of these examples would work in the exhibition. “You have to pick stories visitors can grasp quickly and that they don’t have to read hundreds of words to understand,” Mo says.

This exhibition is a taster of sorts; these stations were picked because they have the best sense of space and state of the Underground at the time. But it will hopefully lead to more interest.

She hopes that it will excite and intrigue visitors, and if it is popular, it will lead to increasing their portfolio of abandoned stations.

“It’s a really lovely glimpse of what it’s like down there, but we want people to go away and use their imagination,” Mo says. “We want to leave them wanting to see more.”

Hidden London: Discovering the Forgotten Underground (£25) is published by Yale University Press, London and is available to buy now.

Young’s Brewery given rebrand with “attitude”